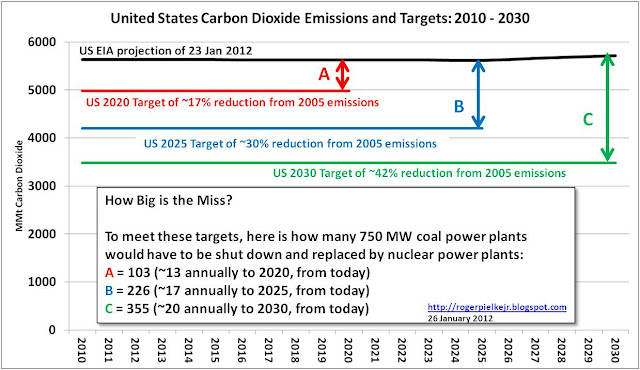 Last week the US Energy Information Agency published an "early release" of its 2012 Annual Energy Outlook, which includes the agency's projections for various energy statistics out to 2030, based on a range of assumptions. The report also includes projections of carbon dioxide emissions to 2035, which allows for a comparison of the Obama Administration's commitments to targets for emissions reduction for 2020, 2025 and 2030 (the formal commitment made under the UN FCCC is here).

The graph at the top of this post shows the U.S. government's emissions projections (black line) and the emissions reduction targets (red, blue and green). In case you were wondering how big the misses are with respect to the targets in some sort of intuitive way, I've provided a measure of the magnitude of the shortfall (using the same methods described in depth in The Climate Fix) in terms of the number of coal power plants that would have to be replaced with nuclear power plants to meet the targets. (If you'd like to replace gas power plants, the numbers are about 40% more, due to the lower carbon intensity of gas generation. If you'd like to use wind turbines or solar power, well, get out a big calculator;-).

It should be fairly obvious that under the assumptions of the EIA (such as positive economic growth) that the emissions reduction targets are not going to be met. Given President Obama's renewed commitment to an "all of the above" strategy for energy production in the United States, is it finally time to dismiss the charade of emissions reductions targets and adopt a different approach?
Posted by Roger Pielke, Jr. at 1/26/2012 12:32:00 PM
Email ThisBlogThis!Share to TwitterShare to FacebookShare to Pinterest
Newer Post Older Post Home