Writing in The Washington Monthly, Michael Mandel of the Progressive Policy Institute has an essay on innovation and productivity provocatively titled "The Myth of American Productivity." Here I critique the argument in the article made by Mandel, specifically his argument that "supply chain innovation" is somehow a bad thing whereas what he calls "domestic innovation" is a good thing. I disagree.

First, here is Mandel's core argument in his own words, in which he argues that increasing agricultural productivity is fundamentally different than increasing productivity in manufacturing:


Consider, for a moment, what a farmer has to do to improve the yield of a corn or wheat field in Kansas or Nebraska. Machinery has to be purchased to plant and harvest the crops. Pesticides and herbicides have to be applied to fight bugs and weeds. Irrigation has to be used appropriately to make sure the crops mature as desired.

In a very real sense, agricultural productivity is intrinsically rooted in American soil. Yes, the tractor might be imported from Japan. But a farmer cannot plant crops in Iowa and then outsource the harvesting to Vietnam. Pesticides have to be sprayed on American bugs, and crops have to be irrigated with American water. Most of the value created by agriculture is made in America.

By contrast, most manufactured goods these days are the product of global supply chains, which may include multiple countries and border crossings. Your smartphone, for example, is assembled from components that were manufactured all over the world. On a less high-tech note, the cedar hangers that organically keep your suits and dresses free of pests may be made of wood grown in the U.S., shipped to China for manufacture, and then shipped back to the U.S. again.

Imagine if you will a big factory building.  Let's say that it has two big doors, one on the front market "Inputs" and one on the back market "Outputs." The company produces Widgets which are sold in the marketplace. Employees, raw materials, tools, machines, processes and techniques are brought in through the Inputs door, and Widgets emerge from the Outputs door.

Under Madel's argument the first machine would be preferred to the transporter, even though they both have exactly the same effect on productivity and number of jobs. However, the different technologies might have profound effects on the kind of jobs that the factory employs, and it is this effect which Mandel notes and disapproves of:


If companies reconfigure themselves to better scour the globe for the lowest-priced goods and services, then their essential personnel are multilingual business school graduates with the ability to parachute into Shanghai or Bangalore and negotiate the best deals with suppliers, logistics experts who can keep the goods flowing, marketers to sell the goods, and software engineers to program the computers that communicate with the suppliers. In other words, the bulk of the company’s own workers essentially perform a creative or coordinating function, rather than a manufacturing one.

One might wonder what is wrong with multilingual business school graduates, logistics experts, marketers and software engineers, especially if such jobs are higher paying than the low value manufacturing jobs that have been displaced. This is of course not a happy situation for those whose manufacturing jobs actually have been displaced, just as it was for farmers a century ago. Hence, in the context of growth in productivity it is essential that the workforce implications of the effects of such growth be addressed proactively. Efforts to freeze in place a particular economic configuration are certainly doomed as strategy.

Mandel actually hits on what really matters but quickly glosses over it:


Without innovation, a supply chain strategy fails over time. 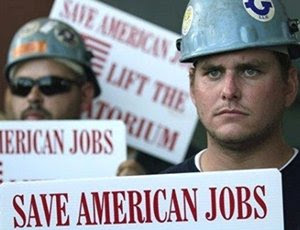 Mandel confuses "competitiveness" with "protectionism" and sees barriers to trade (or perhaps more accurately, incentives not to trade) as a key to improving American job prospects. The results of the policies that Mandel proposes might actually to make the American economy less competitive and less innovative.

Just as was the case in agriculture a century ago, efforts to prop up a part of the economy that is fundamentally and globally in decline as a proportion of economic activity is a losing strategy. Mandel is certainly correct that the policies proposed by both political parties leave much to be desired, but calling for a new version of anti-globalization or trade protectionism (whether soft or hard) is not the right way to go either.

The key to economic growth, jobs and competitiveness in the United States lies in enhancing productivity, where ever opportunities exist, while at the same time managing the consequences (which can be profound and negative for some) of success in that endeavor.
Posted by Roger Pielke, Jr. at 1/11/2012 08:42:00 AM
Email ThisBlogThis!Share to TwitterShare to FacebookShare to Pinterest
Newer Post Older Post Home