The Partisan Divide on the Tebow Question 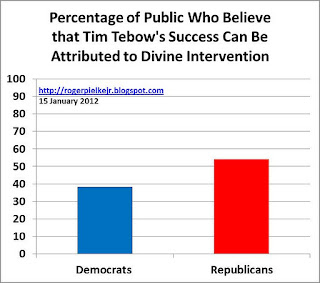 Something to keep in mind when considering ongoing battles over public opinion on various questions related to science on issues like evolution, climate change, genetically modified foods and so on: Consider that about 4 in 10 Democrats and 5 in 10 Republicans think that Tim Tebow's success on the football field (pictured below) can be attributed to "divine intervention."  Data here in PDF from a polling firm called Poll Position.

Political debates that involve science will be far more productive-- for both policy and the health of the scientific enterprise -- if the focus of debates is on policy options rather than what people happen to think about this or that. As Walter Lippmann once said, democracy is about getting people who think differently to act alike, not to get them to think alike.
Posted by Roger Pielke, Jr. at 1/15/2012 01:57:00 PM
Email ThisBlogThis!Share to TwitterShare to FacebookShare to Pinterest
Newer Post Older Post Home