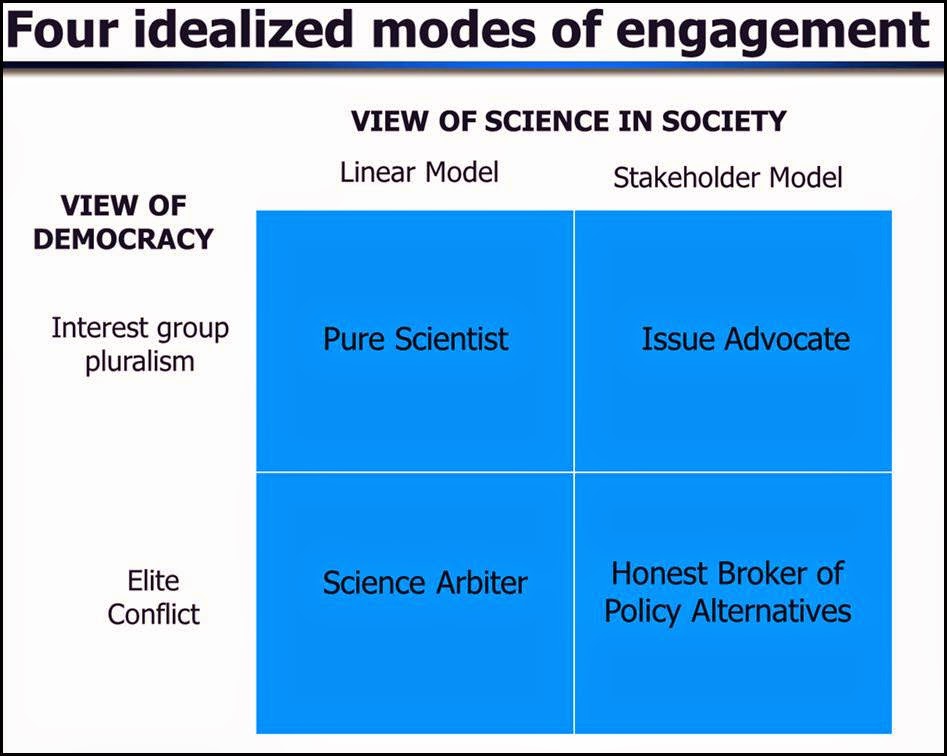 I am happy to discuss this topic further in the comments or on Twitter. There is obviously a lot more in the book, and in various papers and case studies.
Posted by Roger Pielke, Jr. at 1/19/2015 04:27:00 PM
Email ThisBlogThis!Share to TwitterShare to FacebookShare to Pinterest

From Scotland comes this surprising news:

The European Commission has agreed to retain the role of EU Chief Scientific Adviser but it is not expected to stop the Scots incumbent in the position from leaving, it is claimed.

Details of the u-turn were divulged to Scottish Tory MEP Dr Ian Duncan by First Vice-President of the European Commission Frans Timmermans.

There has been no official announcement from the European Commission. In the EC, nothing is final until it is official, and even then subject to a U-turn. Stay tuned.

Regardless what happens, an reinstatement of the Commission CSA should not preempt a much needed conversation about the future of science advice in Europe. It is not enough to have a symbolic office.
Posted by Roger Pielke, Jr. at 1/14/2015 07:15:00 AM
Email ThisBlogThis!Share to TwitterShare to FacebookShare to Pinterest

The Future of Science Advice in Europe

My latest Bridges column is out, and it discusses the future of science advice in Europe following the termination of the office of chief scientific advisor to the European Commission. Here is an excerpt:

In short, the CSA under President Barosso was largely powerless and disconnected. This state of affairs was not the fault of Glover, who took on the CSA role with energy and enthusiasm. The uncomfortable reality is that establishment of the CSA office was a symbolic gesture towards scientific advice, rather than representing any substantive commitment to improving science advice in Europe (see this paper for background).

From this perspective, President Juncker has actually done the scientific community a favor. For the past three years, most scientific organizations and their leaders seemed perfectly content with a symbolic, ineffectual CSA in the Commission. However, the termination of the office has forced a conversation that probably should have been occurring in far more prominent settings. Such a conversation is now underway (see, e.g., this special issue of the European Journal of Risk Regulation) and should continue.

President Juncker has yet to release details on how his administration is to structure advisory mechanisms, noting through a spokesperson: “President Juncker believes in independent scientific advice. He has not yet decided how to institutionalize this independent scientific advice.” However the Commission eventually structures its offices, a few issues will no doubt continue to be at the center of debates over science advice in Europe. Here I suggest several . . .