As I've occasionally mentioned on Twitter, we here at the University of Colorado's Center for Science and Technology Policy Research are proposing to turn our graduate certificate program into a full-fledged professional master's program.

We'd welcome your input and comments.

Here are some details of the draft proposal:

Details on pricing etc. are TBD.

We welcome any thoughts or feedback, especially comments on whether you'd be interested in such a program, and why or why not.

Thanks!
Posted by Roger Pielke, Jr. at 12/18/2014 09:39:00 AM
Email ThisBlogThis!Share to TwitterShare to FacebookShare to Pinterest

Gasoline Intensity of the US Economy at Recent Low (Take Two) 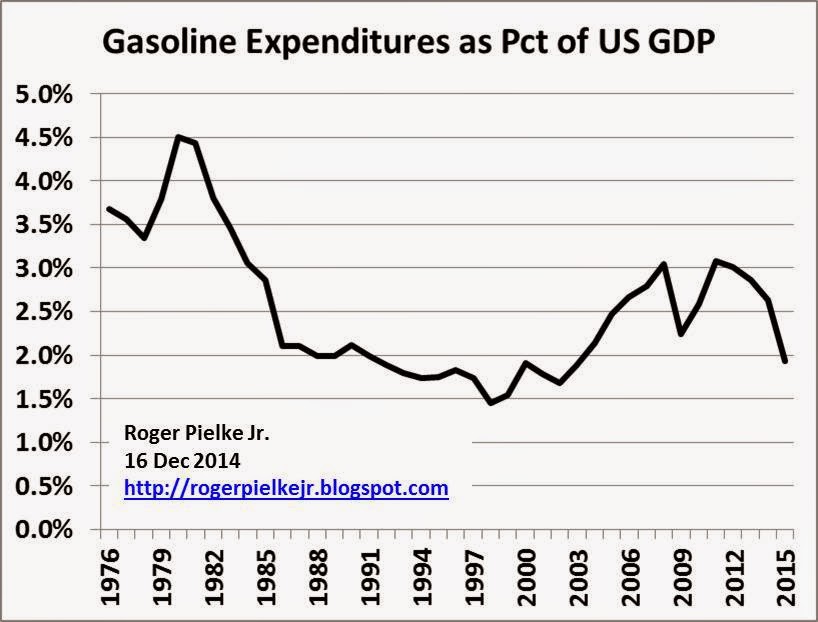 Thanks much to David Appell in the comments, who motivated me to take a second look at this analysis. I had been using a subset of total gasoline consumption in an earlier analysis, and he correctly points out that a more comprehensive measure is better. So this post has subsequently been revised.

Today the US EIA announced that projected household gasoline consumption in 2015 is expected to be the lowest in 11 years. That motivated me to update a graph I did a few years ago on the gasoline intensity of the US economy, defined as the total expenditures at the pump by US consumers as a proportion of overall GDP. (Note: I use annual values here and ignore higher frequency variations.)

That graph is shown above for the period 1976-2015, and shows gasoline as a percentage of overall GDP. The data comes from the US EIA (gasoline product supplied and prices) and the White House (GDP). Data for 2015 are obviously projections.

The bottom line here is that the gasoline intensity of the US economy is lower, by a long shot, than at any time in recent history. That is good news.
Posted by Roger Pielke, Jr. at 12/16/2014 11:32:00 AM
Email ThisBlogThis!Share to TwitterShare to FacebookShare to Pinterest
Newer Posts Older Posts Home
Subscribe to: Posts (Atom)