Dan Sarewitz (ASU) and I have an op-ed just out in the Financial Times. Here is how it starts:


Having failed to stem carbon emissions in rich countries or in rapidly industrialising ones, policy makers have focused their attention on the only remaining target: poor countries that do not emit much carbon to begin with.

My Twitter feed is aflutter with policy wonks debating the pluses and minuses of multilateral energy development aid and investment. There are good arguments to be had of course on all sides. The key difference as I see it is that all of these wonks are benefiting from the profligate consumption of fossil fueled energy while they have these debates.

It is great to say that we need to bring on line carbon-free energy -- and we should. It is also pretty easy to say that new carbon-intensive energy development should be limited if you are benefiting from already-existing carbon-intensive energy while we wait for alternatives, rather than living in dire energy poverty. You can see this trade-off discussed in the form of an exchange between Andy Revkin and Bill McKibben that I relate in The Climate Fix.

There is no case to be made here in my view. So long as countries such as the US are 87% fossil-fueled, UK 87%, Germany 83% (data from BP in 2012), there is little basis for expecting poor countries to develop any differently.

Have a read of our piece, we are happy to hear your reactions.
Posted by Roger Pielke, Jr. at 2/26/2014 01:55:00 PM
Email ThisBlogThis!Share to TwitterShare to FacebookShare to Pinterest

Please Take This Oath of Allegiance

Remember back when the Bush Administration wanted academics to offer an "oath of allegiance" of sorts in order to be considered for a role on an expert advisory committee? Well it appears -- surprise, surprise -- that the Obama Administration does the same sort of thing.

The Washington Post yesterday published an account from Danielle Allen of the Institute for Advanced Study on being approached by the Obama Administration to serve on the National Council on the Humanities:


I was not willing to commit to never criticizing the administration, nor to restricting my publishing agenda to topics that were unlikely to be controversial. There is just no point trying to be a public intellectual if you can’t speak your mind. This requirement was conveyed and discussed through phone calls; I have no written record to prove it. But that was how it went.

Why did the White House want such restrictions? Lawyers told me that the administration didn’t want to have to deal with even one news cycle being overtaken by media frenzy about something some low-level official had said. The administration was trying to survive in our 21st-century media environment.

Back in 2007 when I testified before Congress o the inevitable political nature of the advisory committee process I said the Bush Administration was engaged in "ham-handed information management" (here in PDF). Demanding that an academic refrain from criticizing the Administration or restrict their publishing certainly evokes this same theme.

Efforts to manage what experts can and can not say as advisers to government did not make sense under Bush and they do not make sense under Obama. I wonder if the "war on science" crowd would agree?
Posted by Roger Pielke, Jr. at 2/23/2014 10:19:00 AM
Email ThisBlogThis!Share to TwitterShare to FacebookShare to Pinterest 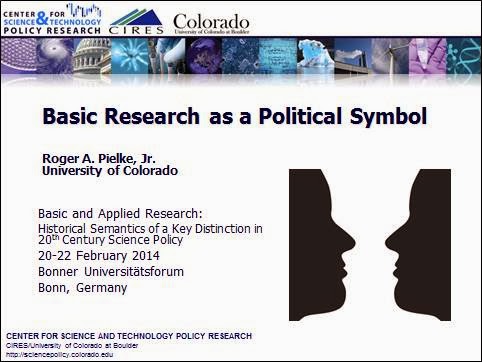 Here in PDF are the slides from my talk today in Bonn. The talk was based on several works (see second-to-last slide) but this is the main one in PDF.

I am in Bonn, at a fascinating (if you are a science policy wonk) workshop titled, "Basic and Applied Research: Historical Semantics of a Key Distinction in 20th Century Science Policy" and organized by David Kaldewey, University of Bonn, and Désirée Schauz, Munich Centre for the History of Science and Technology. The workshop so far has been excellent.

I'm speaking tomorrow and I will mention John Kay's column in the FT from earlier this week, in which he wrote about what has been called basic, fundamental or pure research:


In 1969 Robert Wilson, director of the National Accelerator Laboratory, was testifying before the US Congress. He sought funding for a particle accelerator (forerunner of the Large Hadron Collider at Cern where the Higgs boson was discovered in 2012). Asked by Senator John Pastore how his project would help defeat the Russians, he responded: “It only has to do with the respect with which we regard one another . . . are we good painters, good sculptors, great poets . . . new knowledge has nothing to do directly with defending our country except to help make it worth defending.”

So why don't scientists spend more time defending science as comparable to painting, sculpting or poetry?

The graph at the top of this post provides an answer. On the left is the FY2013 budget for the US National Endowment for the Humanities -- the agency which supports painting, sculpture and poetry. On the right is the federal budget for R&D, which is justified in terms of its utility. The graph says it all.

In the coming weeks I'll have a new piece out on the comprehensive consensus in science policy over the notion that science should be useful, so much so that US Tea Party members are reciting the views of early 20th century communists. Stay tuned for that.
Posted by Roger Pielke, Jr. at 2/20/2014 01:08:00 PM
Email ThisBlogThis!Share to TwitterShare to FacebookShare to Pinterest

You can hear Kevin Trenberth and me discussing extreme events and climate change on Colorado Public Radio. The audio can be found at the link at the top of that page.

In the interview I essentially reflected the IPCC SREX and AR5 views on climate and extreme events. Here is an except from the CPR news story that accompanies it:


After big weather events, the question that often comes up is: "Is climate change responsible for this?" That question has popped up a lot in Colorado recently given massive floods and fires over the past year.

In September 2013, devastating floods hit the Front Range and, less than a year ago, the Black Forest wildfire wiped out more than 500 homes near Colorado Springs.

Colorado hasn’t been alone in its extreme weather misery: Hurricane Sandy ravaged the East Coast in 2012, blizzards and snowstorms tortured the Northeast in 2013 and the current severe drought in California means ski resorts haven’t opened and ranchers are selling off their herds.

Are all these events just Mother Nature cycling through her natural mood swings? Or is it, as some scientists suggest, that the human influence on our climate is causing these weather catastrophes?

Kevin Trenberth, a distinguished senior scientist at the National Center for Atmospheric Research, and environmental scientist Roger Pielke Jr., director of the Center for Science and Technology in Boulder, disagree on the answer.

Comments welcomed!
Posted by Roger Pielke, Jr. at 2/17/2014 11:30:00 AM
Email ThisBlogThis!Share to TwitterShare to FacebookShare to Pinterest 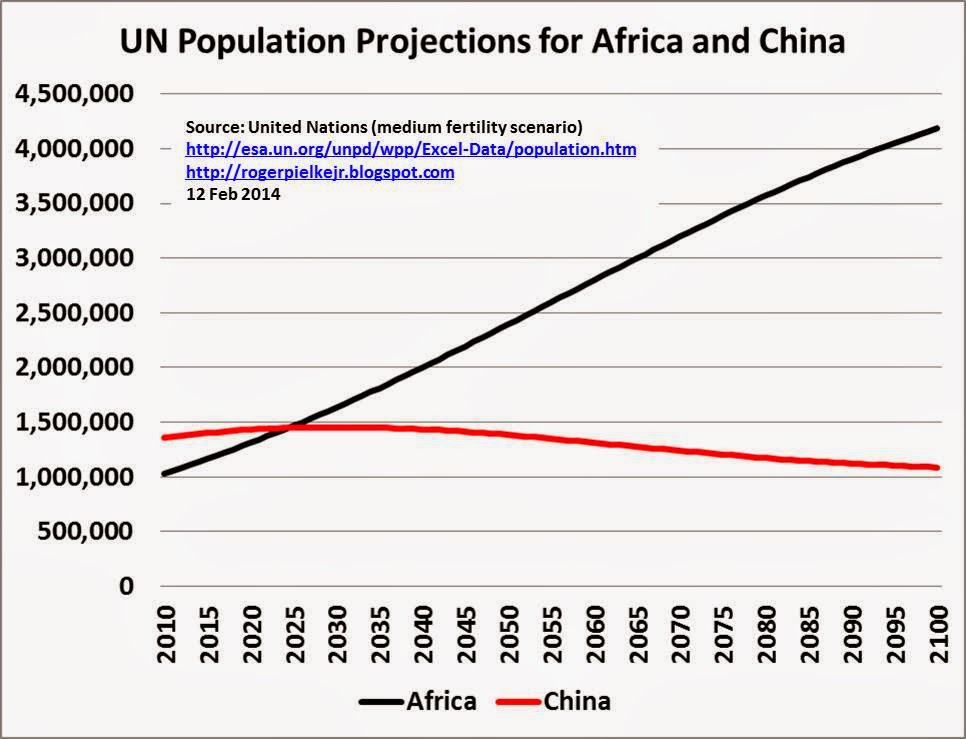 I am re-reading J. D. Bernal's 1939 classic, The Social Function of Science. In it I found this interesting passage on geoengineering and climate change:


It will no longer be a question of adapting man to the world but the world to man. For instance, the present Arctic with its wastes of tundra, glacier, and sea ice is a legacy of the geological accident of the Ice Age. It will disappear in time, leaving the world a much pleasanter place, but there is no reason why man should not hasten the process. By an intelligent diversion of warm ocean-currents together with some means of colouring snow so that the sun could melt it, it might be possible to keep the Arctic ice-free for one summer, and that one year might tip the balance and permanently change the climate of the northern hemisphere.

Geoengineering peeps take note.
Posted by Roger Pielke, Jr. at 2/10/2014 10:39:00 AM
Email ThisBlogThis!Share to TwitterShare to FacebookShare to Pinterest

A New Professional Masters Program in Science and Technology Policy

If successful we could be admitting our first class of students in the fall semester of 2015, but a lot has to happen before that can occur. As part of the proposal process, I am soliciting expressions of interest, support and advice, which you can email to me or enter into the comments.

Specifically, we imagine a 12-month curriculum such as the following:

Some questions for readers:

Would you enroll in such a program?
Would you consider such a degree as an add-on to a disciplinary MA, MS, MBA, JD or PhD?
If so, what sorts of skills/capabilities/expertise would you like to gain?