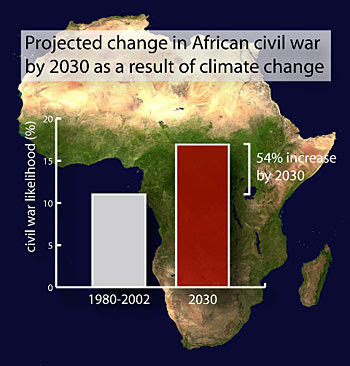 Late last year the Proceedings of the National Academy of Science published a paper by Burke et al which claimed that climate change resulting from greenhouse gas emissions was dramatically increasing civil wars in Africa, and this trend would continue in the near term.

The Cal-Berkeley press release included this quote (and the image above) from one of the authors:


"We were definitely surprised that the linkages between temperature and recent conflict were so strong," said Edward Miguel, professor of economics at UC Berkeley and faculty director of UC Berkeley's Center for Evaluation for Global Action. "But the result makes sense. The large majority of the poor in most African countries depend on agriculture for their livelihoods, and their crops are quite sensitive to small changes in temperature. So when temperatures rise, the livelihoods of many in Africa suffer greatly, and the disadvantaged become more likely to take up arms."

Not long after, the paper was strongly criticized in a reply also published in PNAS:


[T]he proposition by Burke et al. (1) that warming may be a directly causative factor in the risk of civil war in Sub-Saharan Africa seems unlikely. . . Our greatest concern with the analysis is the characterization of the link between warming and large-scale conflict (>1,000 battle deaths). The title of the paper, “Warming Increases the Risk of Civil War in Africa,” suggests causation, but the evidence presented is not substantive enough to warrant such a conclusion. Although warming may serve as a proxy for correlated variables such as decreased soil moisture and reduced agricultural production, identifying warming, or even agricultural production, as primary factors in civil war oversimplifies systems affected by many geopolitical and social factors.

In their rejoinder to the reply Burke et al. appeared to back off their claims of causation:


Our paper does not argue that temperature is the only—or even the primary—determinant of civil war. Further work is needed to understand how climate affects civil war, and we note this clearly in our paper.

Just this week PNAS has published a new paper by Halvard Buhaug that thoroughly eviscerates Burke et al. Buhaug's conclusion is unambiguous (I do not see it at PNAS yet [UPDATE: Online here in PDF, Thx MC], but an early version is here in PDF):


The simple fact is this: climate characteristics and variability are unrelated to short-term variations in civil war risk in Sub-Saharan Africa. The primary causes of civil war are political, not environmental, and although environmental conditions may change with future warming, general correlates of conflicts and wars are likely to prevail. . . The challenges imposed by future global warming are too daunting to let the debate on social effects and required countermeasures be sidetracked by atypical, nonrobust scientific findings and actors with vested interests.

Burke has reacted strongly against Buhaug, accusing him of having cherry-picked his datasets (Note: Figure 2 in Buhaug is pretty convincing to me.).  While climate change may not be the cause of African civil wars, it does seem to be the cause of civil wars in academia.
Posted by Roger Pielke, Jr. at 9/07/2010 10:05:00 AM
Email ThisBlogThis!Share to TwitterShare to FacebookShare to Pinterest
Newer Post Older Post Home