Reducing Hunger and the "Iron Law" of Climate Policy

Today the Food and Agriculture Organization of the United Nations released a preview of its flagship report, "The State of Food Insecurity in the World," which is due to be released in October.  The preview has some good news: the number of people worldwide in chronic food shortage dropped 10% over the past year to "only" 925 million.  This can be seen in the graph below from the release. 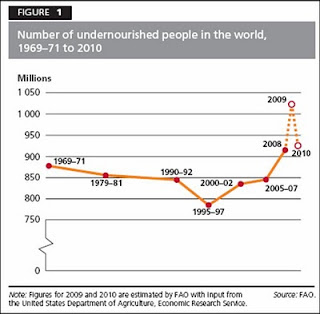 Let me try to disentangle this in a way that might help to illustrate the "iron law" of climate policy that I discuss in The Climate Fix.


The 2010 lower global hunger number resulted largely from renewed economic growth expected this year — particularly in developing countries — and the drop in food prices since mid-2008.

According to FAO last year (PDF), one primary reason was the cost of fuel:

These twin dynamics illustrate several important boundary conditions for a successful climate policy -- that is, one focused on stabilizing atmospheric concentrations of carbon dioxide at a low level.  The boundary conditions are that (a) economic growth must not be slowed, and (b) energy cannot be made appreciably more expensive. (You need only have a look at the Kaya Identity to see why this is the case.)

Policies that reduce economic growth and/or make energy more expensive will lead to more hungry people around the world. This is just an empirical reality.

In 2008, those seven countries accounted for almost 30% of total global carbon dioxide emissions, a proportion that is growing rapidly.  The realities of poverty alone help to explain why India and China, in particular, have approached climate policy as a lower priority than economic growth.

Yukiko Omura, Vice President of the International Fund for Agricultural Development, explains that,


"the world's hungry are not just numbers. They are people — poor women and men struggling to bring up their children and give them a better life; and they are youth trying to build a future for themselves. It is ironic that the majority of them actually live in rural areas of developing countries. Indeed, over 70 percent of the world's extremely poor — those people who live on less than US$ one a day — live in rural areas. That's a billion people, and four out of five of them are farmers to some extent or the other."

In this context, arguments about long-term costs and benefits and unaccounted for externalities -- no matter how theoretically valid -- simply will not trump the immediate challenges of reducing hunger.  To put more bluntly -- few are going to be willing to increase (or arrest the decrease of) the number of starving people around the world to further an emissions reductions agenda.

So we'll simply have to find another way -- one that prioritizes (rather than slows) economic growth and one that focuses on making energy less costly.  Until we do so, climate policy will continue to make little progress.  It is an iron law.