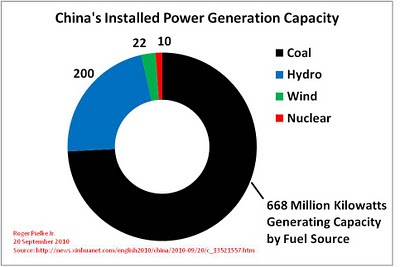 The figure above is created from data in this Xinhua.net news article, which notes that today, China's energy generation capacity exceeds 900 million kilowatts for the first time:


Zhang Ping, director of the National Development and Reform Commission (NDRC), hailed the achievement as "a new stage of development" for China's power industry at a forum held in Beijing on nuclear power development.
"Starting from a weak basis, we have explored a path of healthy development for the country's electricity industry," Zhang told the forum.

Zhang said China will continue to transform the growth pattern of the electricity industry and further facilitate its restructuring by producing more clean energy.

China has long relied on coal to fuel its economic growth as about three quarters of its electricity output is produced by coal-fired power stations.