Floods in the Eastern United States 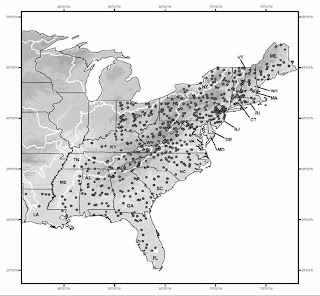 A new paper is out in Water Resources Research that looks at flooding in the eastern United States.  The paper looks at peak flood distributions for 572 stations over 75 years (pictured above).  The paper concludes:


Only a small fraction of stations exhibited significant linear trends. For those stations with trends, there was a split between increasing and decreasing trends. No spatial structure was found for stations exhibiting trends. There is little indication that human‐induced climate change has resulted in increasing flood magnitudes for the eastern United States.

Logically, the inability to detect a signal of human-induced climate change in flood magnitudes means that it is impossible to detect such a signal in the damage record, which is comprised of more moving parts than just high water.
Posted by Roger Pielke, Jr. at 9/09/2010 03:38:00 PM
Email ThisBlogThis!Share to TwitterShare to FacebookShare to Pinterest
Newer Post Older Post Home