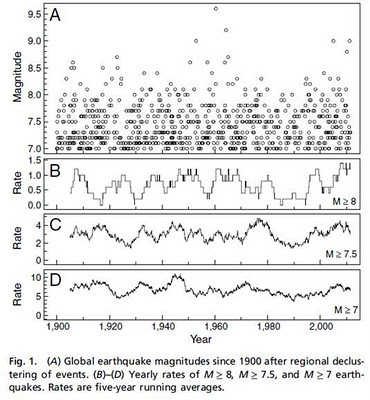 The figure above comes from a new paper by Shearer and Stark in PNAS which is titled, "Global risk of big earthquakes has not recently increased" which clearly answers the question posed in the title to this post. The figure above showing earthquake rates for different magnitudes since 1900 comes from their paper.  Here is their conclusion:


Our conclusion that the global threat of large earthquakes has not recently increased is based both on the lack of statistical evidence that regionally declustered seismicity is temporally heterogeneous on a global scale and on the implausibility of physical mechanisms proposed to explain global clustering. The estimated global rate of very large (M >9) earthquakes is still very uncertain because only five such events have occurred since 1900. The recent elevated rate of large earthquakes has increased estimates of large earthquake danger: The empirical rate of such events is higher than before. However, there is no evidence that the rate of the underlying process has changed. In other words, there is no evidence that the risk has changed, but our estimates of the risk have changed.

Although there is little evidence that the global threat of earthquake occurrence has changed in areas far from recent activity, the current threat of large earthquakes is certainly above its long-term average in regions like Sumatra, Chile, and Japan, which have recently experienced large earthquakes. Finally, of course, even if the danger has not increased recently, that does not mean that the ongoing danger is small or should be ignored.

Here also is a neat figure showing the recent high magnitude earthquakes in historical context from my colleague here at CIRES, Roger Bilham.
Posted by Roger Pielke, Jr. at 1/06/2012 11:29:00 AM
Email ThisBlogThis!Share to TwitterShare to FacebookShare to Pinterest
Newer Post Older Post Home