Celebrating the Decline of Manufacturing 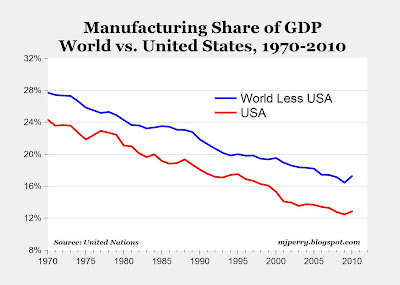 The image above comes from Mark Perry, a professor of economics and finance at the University of Michigan, who writes on his Carpe Diem blog:

In reality, the chart above shows that the decline in U.S. manufacturing as share of GDP between 1970 and 2010 is really a global phenomenon as the entire world becomes increasingly a service-based economy.


[T]he declining manufacturing/GDP ratio reflects declining prices for manufacturing goods, which is a sign of economic progress, not regress. The standard of living around the world today, along with global wealth and prosperity, are all much, much higher today with manufacturing representing 16% of total world output (including the U.S.) compared to 1970, when it was almost twice as high at almost 27%. And for that progress, we should celebrate, not complain about the "decline of manufacturing."

His logic seems compelling, no?