Manufacturing, Services, Resources: One is Different 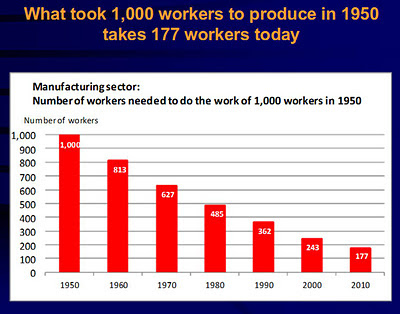 These dynamics should tell you that the simple mathematics of President Obama's new "insourcing" proposal's can only influence jobs at the very thin margin, if at all. The president explained:


“I don’t want America to be a nation that’s primarily known for financial speculation, and racking up debt and buying stuff from other nations,” the president said. “I want us to be known for making and selling products all over the world stamped with three proud words, ‘Made in America.’ ”

But here is the problem: Due to advances in manufacturing productivity that have exceeded the growth of the economy, manufacturing is a shrinking part of the global and national economy. If productivity growth were to slow or reverse, then jobs would be lost overseas anyway. Efforts to expand employment in manufacturing are simply swimming upstream against a strong current.

The Obama Administration does not seem to recognize, at least publicly, the implications of these various trends. The White House explains:


[C]ontinued productivity growth has – as several outside analysts have noted – made the United States more competitive in attracting businesses to invest and create jobs by reducing the relative cost of doing business compared to other countries.

Of course, one of the reasons for productivity growth is lower unit labor costs!

Seeking to keep manufacturing as an important element of the US economy is not the same thing as increasing employment in manufacturing. The Administration will have far more success supporting job creation by focusing on areas that are expanding parts of the economy, meaning that policy will be going with rather than against the current. Specifically, two other areas of the economy are expanding in both absolute and relative terms, natural resources and services.

While manufacturing seems to garner a lot of attention, particularly in politically important states, that does not mean that the administration is neglecting natural resources, particularly energy (I'll have more to say on services in subsequent posts).

The White House explains the importance of energy resources with a lot less fanfare than its focus on manufacturing (PDF):


Of the major fossil fuels, natural gas is the cleanest and least carbon‐intensive for electric power generation. By keeping domestic energy costs relatively low, this resource also supports energy intensive manufacturing in the United States. In fact, companies like Dow Chemical and Westlake Chemical have announced intentions to make major investments in new facilities over the next several years. In addition, firms that provide equipment for shale gas production have announced major investments in the U.S., including Vallourec’s $650 million plant for steel pipes in Ohio.

An abundant local supply will translate into relatively low costs for the industries that use natural gas as an input. Expansion in these industries, including industrial chemicals and fertilizers, will boost investment and exports in the coming years, generating new jobs. In the longer run, the scale of America's natural gas endowment appears to be sufficiently large that exports of natural gas to other major markets could be economically viable.

The politics of resources, especially energy resources, are problematic for the Obama Administration, with the Keystone XL pipeline Exhibit A. But if expanding jobs means paying attention to those parts of the economy that are expanding rather than shrinking, then the Obama Administration won't be able to keep the ongoing energy revolution on a back burner for too long.
Posted by Roger Pielke, Jr. at 1/15/2012 04:11:00 PM
Email ThisBlogThis!Share to TwitterShare to FacebookShare to Pinterest
Newer Post Older Post Home