Does Basic Research Drive out Applied? 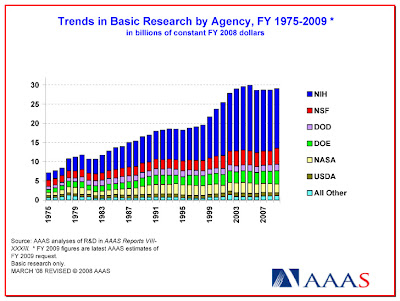 In the seminal 1945 report on science policy, Science -- The Endless Frontier, Vannevar Bush expressed a view of the relationship of basic and applied research in the federal government:


. . . under pressure for immediate results, and unless deliberate policies are set up to guard against it, applied science invariably drives out pure.

Writing in last week's Nature, Dan Sarewitz wonders if this relationship has now been reversed based on recent budget numbers:

[O]ver the past 15 years, mission agencies such as the USGS that seek principally to serve public goals rather than to advance science have experienced minimal budgetary growth, in some cases not even keeping up with inflation. Since 1996, research funds at the USGS have risen by a mere 16%; at the National Oceanic and Atmospheric Administration (NOAA), 11%; the Environmental Protection Agency, 33%; the National Institute of Standards and Technology (NIST), 38%; and the Centers for Disease Control and Prevention, 45%. Even Department of Defense research has grown relatively modestly, by 60% in 15 years.

Yet, over this same period, government funding for research doubled. Most of the increase went to the National Institutes of Health (NIH) and the National Science Foundation (NSF). The NIH's budget has tripled; the NSF's more than doubled. Together, they captured three-quarters of all the spending increases for federal science. (Although the NIH is in some respects a mission agency, its priorities, its work force and the image it has cultivated focus on fundamental science, a reality acknowledged in director Francis Collins's efforts to create an institute to translate research into useful technology).

Sarewitz explains that it is in the self-interests of the scientific community to support blue-sky research at the expense of that conducted by the mission agencies:


One important reason may be that the leading public voices speaking on behalf of research funding come mostly from the high-prestige frontiers of science, and from the institutions associated with such research — universities, the National Academies, the professional scientific societies, and so on.

Last November, for example, the head of the American Association for the Advancement of Science called for “rethinking the science system” to make the funding of university researchers more efficient (A. I. Leshner Science 334, 738; 2011). This is a worthy goal, but nowhere in his editorial, or in the many similar examples of hand-wringing, is it acknowledged that the main goal of rethinking science should be to ensure that the scientific enterprise continues to meet existing and future challenges to public well-being, not simply to protect science for its own sake.

Defending science for its own sake disproportionately benefits the fundamental-science agencies, which can claim to be doing the most prestigious and therefore the most apparently worthwhile science. In the face of the new budgetary reality, advocacy for science must take a new, strategic approach — one that insists on balance between the fundamental-science agencies and the mission agencies that link science to the public good. Otherwise, the value of the public investment in science will decline right along with the budget.

So-called "basic research" is important, but so too is research conducted by mission agencies. Nowadays it seems that basic drives out the applied.
Posted by Roger Pielke, Jr. at 1/12/2012 04:43:00 PM
Email ThisBlogThis!Share to TwitterShare to FacebookShare to Pinterest
Newer Post Older Post Home