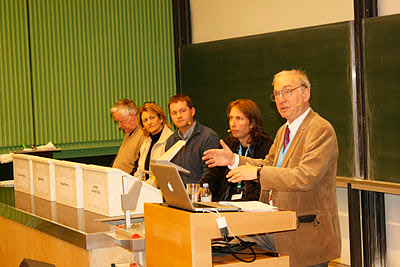 Jerry Ravetz (pictured above) has a commentary in Nature in which he argues that as the walls come down between scientists and the public, largely because of digital media (such as blogs), the credibility and legitimacy of science as an institution will depend upon maintaining the trust of the broader society. Maintaining trust depends, among other things, on respectful and civil discourse via the new media technologies, among experts and between experts and the broader public.


Ultimately, effective quality assurance depends on trust. And science relies on trust more than most institutions. As Steven Shapin, a historian of science at Harvard University in Cambridge, Massachusetts, showed in his 1994 book A Social History of Truth, trust is achieved and maintained only by mutual respect and civility of discourse. In a digital age, civility should be extended to, and reciprocated by, the extended peer community.

Scientists have a special responsibility, but also a special difficulty. When their training has been restricted to puzzles with just one right answer, scientists may find it hard to comprehend honest error, and may condemn those who persist in apparently wrong beliefs. But amid all the uncertainties of science in the digital age, if quality assurance is to be effective, this lesson of civility will need to be learned by us all.

Not everyone agrees. Paul Krugman, for one, sees incivility as a virtue and strongly defends his brusque approach to discourse:


I understand that many people find the notion of a world in which Nobel Laureates and ECB presidents declare that 2+2=5 very unappealing, and that they wish we lived in a different and better world. But we don’t — and it’s not my job to create the illusion that we do. . .

I realized that I also wanted to say something in response to the concern trolling, the “if you were more moderate you’d have more influence” stuff. Again, this amounts to wishing that we lived in a different world. First, there is no such thing in modern America as a pundit respected by both sides. Second, there are people writing about economic issues who are a lot less confrontational than I am; how often do you hear about them? This is not a game, and it is also not a dinner party; you have to be clear and forceful to get heard at all.

Krugman, and other bloggers who adopt discourteous approaches, may be confusing getting attention with being correct, being forceful with being influential and being a pundit with being an expert. After all, Kim Kardashian also gets a lot of attention and Rush Limbaugh is plenty forceful and Bill O'Reilly is a pundit. Of course, all are very effective, in the contexts in which they operate. But are they models for what experts really wish to become?

If the goal of public discourse is to divide people along partisan lines, to raise their intensity and to demonize one's opponents, then Krugman no doubt has the correct strategy. But if the goal is to help society pursue common interests, to open up opportunities for compromise and to reinforce the integrity of institutions, then Ravetz surely has the more appropriate approach.

Society is a big place and there is plenty of room in the blogosphere and elsewhere for Krugmans and Ravetzes -- both play important roles in a democracy. However, for the scientific community broadly, Ravtez is correct that science is more constrained in its options -- seeking to be "respected by both sides" is not just the right thing to do, but it is the only way that science will sustain as an effective institution in the broader society.

Image above (of Ravetz and a few other academics) and a hat-tip to Klimazwiebel.
Posted by Roger Pielke, Jr. at 1/09/2012 07:55:00 AM
Email ThisBlogThis!Share to TwitterShare to FacebookShare to Pinterest
Newer Post Older Post Home