EU Decarbonization 1980 to 2010 and Non-Carbon Forcings 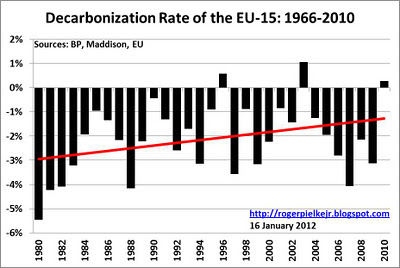 Welcome, if you have arrived at this blog after reading John Tierney's column in the New York Times on the recent Shindell et al. paper in Science on addressing climate forcings other than carbon dioxide. Shindell et al. was first discussed here early last year when it was released as a UNEP report.

In Tierney's column he references The Climate Fix and some updated data analysis that I did for him in response to a query about Europe's rate of decarbonization. When I wrote The Climate Fix data were available through 2006. I now have data through 2010 -- from BP (for carbon dioxide), Maddison (for GDP through 2008), and Eurostat (for GDP in 2009 and 2010).

Here is the relevant passage from Tierney's column that relies on the updated analysis:


Ever since the Kyoto Protocol imposed restrictions in industrial countries, the first priority of environmentalists has been to further limit the emission of carbon dioxide. Burning fewer fossil fuels is the most obvious way to counteract the greenhouse effect, and the notion has always had a wonderfully virtuous political appeal — as long as it’s being done by someone else.

But as soon as people are asked to do it themselves, they follow a principle identified by Roger Pielke Jr. in his book “The Climate Fix.” Dr. Pielke, a political scientist at the University of Colorado, calls it iron law of climate policy: When there’s a conflict between policies promoting economic growth and policies restricting carbon dioxide, economic growth wins every time.

The law holds even in the most ecologically correct countries of Europe, as Dr. Pielke found by looking at carbon reductions from 1990 until 2010.

The Kyoto Protocol was supposed to put Europe on a new energy path, but it contained so many loopholes that the rate of “decarbonization” in Europe did not improve in the years after 1998, when the protocol was signed, or after 2002, when it was ratified. In fact, Europe’s economy became more carbon-intensive in 2010, he says — a trend that seems likely to continue as nuclear power plants are shut down in Germany and replaced by coal-burning ones.

“People will make trade-offs, but the one thing that won’t be traded off is keeping the lights on at reasonable cost,” he says.

Here is information that I sent to Tierney in response to a question about whether Europe's decarbonization data looked any different if one used its ratification of Kyoto as a break point, rather than the signing of the treaty:


On European decarbonization, Europe was an original signatory of the Kyoto Protocol (1998) and a first to ratify (2002). To look into this further, I have just now looked at data using 2002 (ratification) as a break point instead of 1998, and the average for the 8 years prior to 2002 is identical to the rate of decarbonization the eight years after (a decrease of 1.8% per year in the ratio of CO2/GDP in both cases). (Note that I now have data through 2010.) In fact, the long-term rate from 1989-2010 is also 1.8% per year! So there is still no evidence that Europe has fundamentally increased its decarbonization rate in the post-Kyoto era, whether that break point is 1998 (signing) or 2002 (ratifying).

You can see the decarbonization rates of the EU-15 from 1980 to 2010 in the graph at the top of this post.  As I mention above, there is no trend in the data since the late 1980s, but there is a decreasing rate of decarbonization if you start the analysis in 1980 (see the red trend line on the graph). A decreasing rate of decarbonization means that the European economy is becoming more carbon intensive than required to hit ambitious emissions targets. If you are interested in understanding how it is that Germany has come to rely more on coal, this paper is a good place to start.


“But I also worry that carbon dioxide will go up even if we do focus on it,” he says. “We’re at a complete deadlock on carbon dioxide. Dealing with the short-lived pollutants might really be a way to bridge some of the differences, both between the two sides in the United States and between the developed and the developing world.”

No matter what people think about global warming, there aren’t a lot of fans of dirty snow, poor crops and diseased lungs.