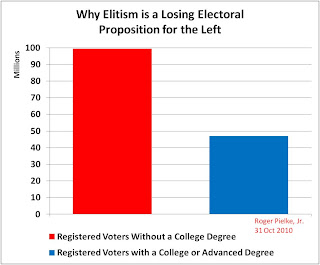 If you spend anytime at all perusing the blogosphere, you will find a common theme coming from self-described liberal or progressive bloggers, and that is that those on the political right are ignoramuses. The argument is that they are just too stupid to know what's what - they are even anti-science, rejecting knowledge itself -- and consequently they support dumb candidates advocating ignorant policies. Such arguments are particularly evident in the corner of the blogosphere that discusses the climate change issue.  This line of argument of course is a variant of the thinking that if only people shared a common understanding of scientific facts they would also share a common political orientation (typically the political orientation of whomever is expressing these views).

Today's New York Times explains that top Democrats, including Barack Obama and Bill Clinton have bought into this view, leading to charges of elitism from their political opponents.  Here is an excerpt:


In the Boston-area home of a wealthy hospital executive one Saturday evening this month, President Obama departed from his usual campaign stump speech and offered an explanation as to why Democrats were seemingly doing so poorly this election season. Voters, he said, just aren’t thinking straight.

“Part of the reason that our politics seems so tough right now, and facts and science and argument does not seem to be winning the day all the time, is because we’re hard-wired not to always think clearly when we’re scared,” he told a roomful of doctors who chipped in at least $15,200 each to Democratic coffers. “And the country is scared, and they have good reason to be.”

The notion that voters would reject Democrats only because they don’t understand the facts prompted a round of recriminations — “Obama the snob,” read the headline on a Washington Post column by Michael Gerson, the former speechwriter for President George W. Bush — and fueled the underlying argument of the campaign that ends Tuesday. For all the discussion of health care and spending and jobs, at the core of the nation’s debate this fall has been the battle of elitism.

And here is what the NYT reports about Bill Clinton expressing similar views:


Former President Bill Clinton has a riff in his standard speech as he campaigns for Democrats in which he mocks voters for knowing more about their local college football team statistics than they do about the issues that will determine the future of the country. “Don’t bother us with facts; we’ve got our minds made up,” he said in Michigan last week, mimicking such voters.

But if they understood the facts, he continued, they would naturally vote Democratic. “If it’s a choice and we’re thinking, he wins big and America wins big,” Mr. Clinton told a crowd in Battle Creek, pointing to Representative Mark Schauer, an endangered first-term Democrat.

The problem with such arguments is that they are simply wrong,  Facts do not compel particular political views, much less policy outcomes.

But for the purposes of discussion, let's just assume that those on the political right are in fact ignoramuses. Even if that were the case, appeals to the wisdom of the educated (and the stupidness of others) would still be a losing electoral proposition as shown by the graph at the top of this post (data here in XLS): Americans older than 18 registered to vote with a college degree represent only 32% of the voting population.  Those with an advanced degree represent only 11% of the population registered to vote. For those smart folks on the left, I shouldn't have to explain the corresponding electoral implications.

It should also be fairly obvious that when highly educated people tell those who are less educated that they are too stupid to know better, it probably does not lead to acceptance of claims to authority, much less reinforce trust in experts.  In fact, it might even have the opposite effect.

For those on the left who spend a lot of time explaining how intelligent they are, their politics are not always so smart.
Posted by Roger Pielke, Jr. at 10/31/2010 11:29:00 AM
Email ThisBlogThis!Share to TwitterShare to FacebookShare to Pinterest
Newer Post Older Post Home