If it is not True and not False, then What is It? 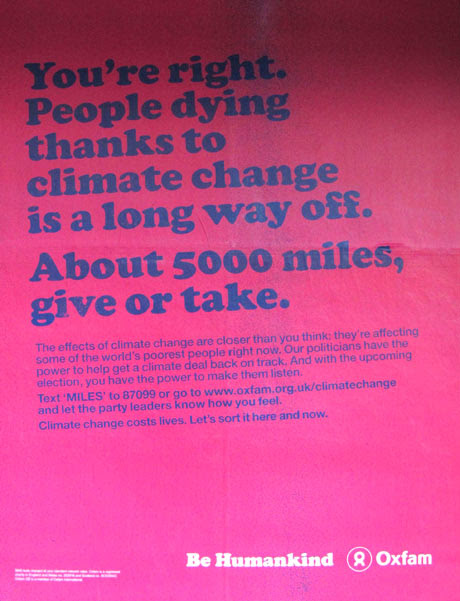 The Guardian reports that the British Advertising Standards Authority -- an independent body recognized by government that adjudicates claims of truth or falsity in advertising -- has ruled that the advertisement shown above from Oxfam is not false.  Here is the explanation in full:


The ASA understood that the Intergovernmental Panel on Climate Change (IPCC), established by the World Meteorological Organisation (WMO) and United Nations Environment Programme (UNEP), was considered, through its work collating data from peer reviewed climate science papers internationally, to be the world's most authoritative source of information on climate science. Taking into account statements issued by other national and international bodies with expertise in climate science, we considered there was a robust consensus amongst them that there was extremely strong evidence for human induced climate change. We noted that the part of Oxfam's claim that stated "Our politicians have the power to help get a climate deal back on track ... let's sort it here and now" made a link between human action and climate change.

We noted that Oxfam had supplied a WHO fact sheet which had been published in January 2010 and which stated "Globally, the number of reported weather-related natural disasters has more than tripled since the 1960s. Every year, these disasters result in over 60,000 deaths, mainly in developing countries" and confirmation from WHO that that position still, in June 2010, reflected WHO's assessment of the situation. We noted that that statement reflected findings set out in more detail in WHO's publication "The World Health Report 2002 Reducing Risks, Promoting Healthy Life", which stated "Climate change was estimated to be responsible in 2000 for approximately 2.4% of worldwide diarrhoea, 6% of malaria in some middle income countries and 7% of dengue fever in some industrialized countries. In total, the attributable mortality was 154 000 (0.3%) deaths ..." and WHO's 2009 publication "GLOBAL HEALTH RISKS - Mortality and burden of disease attributable to selected major risks", which stated "Climate change was estimated to be already responsible for 3% of diarrhoea, 3% of malaria and 3.8% of dengue fever deaths worldwide in 2004. Total attributable mortality was about 0.2% of deaths in 2004; of these, 85% were child deaths". We noted that those statistics were broken down in more detail according to cause and region in WHO's 2004 publication, "Comparative Quantification of Health Risks." We also noted that the IPCC Report's position was that changes in weather trends had led to increased disease.

We noted that Oxfam's claim was reasonably restrained in that it stated deaths were occurring at the present time as a result of climate change but that it did not claim specific numbers of deaths were attributable and it did not speculate about future numbers of deaths. Because of that, and because of the consensus that we considered already existed amongst climate scientists that there was extremely strong evidence for human induced climate change, and because of a similar consensus that climate change was now resulting in people dying, we concluded that the ad was not misleading.

In The Climate Fix, I discuss the WHO claims in some detail, and point out that the WHO itself explains that their findings do not accord with the canons of empirical science (see p. 177).  I argue that the WHO results are a guess on top of speculation.  They are not true.

Well, if the WHO claims are not true, and the ASA says that they are not false, then what is their epistemological state?  They are, I suppose, whatever you want them to be.  Welcome to post-normal science.  From where I sit, seeking to justify action on emissions or even adaptation based on allegations that people are dying of climate change today is both wrong and wrongheaded, for reasons that I describe in some depth in TCF. Was the ASA decision wrong?  No.  But it wasn't right either.
Posted by Roger Pielke, Jr. at 10/28/2010 07:14:00 AM
Email ThisBlogThis!Share to TwitterShare to FacebookShare to Pinterest
Newer Post Older Post Home