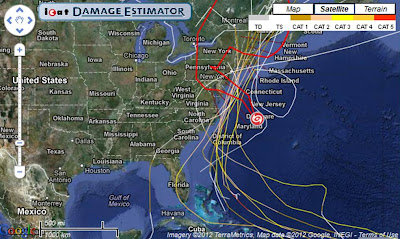 From the ICAT Damage Estimator, here is a table showing the damage from the top 10 historical storms which had a track that passed within the NHC forecast "cone" of Hurricane Sandy's current projected track.


Some notes and caveats:

1. The estimates include hurricane damage as defined by NOAA. Most importantly that does not include inland flood damage that may occur when a storm moves inland (that damage is recorded under flood damage). Several of these storms would have much higher damage if inland flood damage were to be included.

2. So when comparing damage estimates that you may see for Sandy to those here, to compare apples to apples, a rough method will be to take estimated insured losses and multiply by two.

4. As you can see in the map at the top of this post, none of the historical storm tracks make for good analogues for Sandy. All of the top 10 were category 3s at landfall except Bob (2), Agnes (1) and Diane (TS). And all were in Aug or Sept except Agnes (June).