Gordon vs. Gordon on Growth

This post is a follow up to the discussion on this blog a few weeks ago of economist Robert Gordon's provocative paper which asked, "Is US economic growth over?". Gordon's paper has been much discussed in the pages and blogs of the New York Times, Washington Post, Financial Times and elsewhere. Remarkably, the wide-ranging discussion took place with no one figuring out that Gordon's claims are in error and based on a selective and non-representative parsing of the data. (The FT did publish a letter of mine, however.)

Let's review. Gordon claims that US per capita economic growth has "steadily" declined from 1950 to 2007 (prior to the recent economic crisis) and uses this history as the basis for projecting a continued decline to 2100. Gordon goes further into the past to suggest that the economic growth of the past century was a "one time event."

As I am in the early stages of working on a book on innovation and growth, upon reading Gordon's analysis I sought to replicate it as the claims being made were counter to data that I have been working with. So I wanted to understand why. Gordon explained in his paper that he arrived at a stair step decline in US per capita GDP growth as follows:

Gordon confirmed these breakpoints in an email response to a query, explaining that they represented periods of "normal" business cycle utilization. However, when I sought to replicate this analysis I came up with these numbers for per capita GDP growth rates:

Clearly, this was not a stair step decline. In fact, aside from a brief increase in growth rates in the period 1964 to 1972, there was exceedingly little change in per capita growth rates since 1950 (and in fact, since 1870).

In a further email exchange, which included Martin Wolf of the FT, Gordon admitted that his paper had an error. There was in fact no breakpoint in 1964. He had instead combined the first two periods in his figure, which, when appended to his pessimistic forecast for 2007-2027 give the appearance of a stair-step decline, even though the data from 1950 to 2007 shows exceedingly little decline. The error in the paper leads to a replication which counters the claims being made -- unfortunate but true.

After waiting more than a week, I asked Gordon if he was going to correct the error in his paper and he replied that it was not worth making a fuss about. Academics can be prickly about critique, especially from outside the home discipline, but it is standard practice to acknowledge and correct errors, especially in work that is widely discussed. In Gordon's case, correcting the error would likely require an explanation why the decline only exists with the choice of certain breakpoints and not others -- which takes Gordon's analysis down a difficult, perhaps unrecoverable path.

On this issue I will let a very prominent and widely respected economist have the last word. The graph and conclusions below are perfectly in sync with my own critique of Gordon (2012). They come from a 2004 paper titled,"Two Centuries of Economic Growth: Europe Chasing the American Frontier." There this respected economist wrote (emphases added): 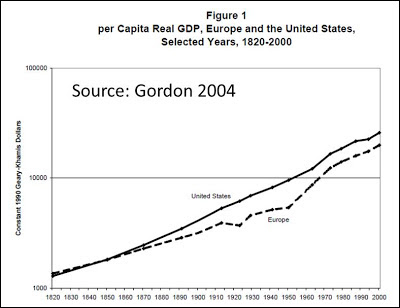 Plotted on a log scale for selected years that are ʺneutralʺ to the business cycle, i.e., excluding the influence of recessions, depressions, and wars, the most striking fact displayed in Figure 1 is the steady and inexorable advance of U. S. real GDP per capita. While the growth rate is slower in the first 50 years, between 1820 and 1870, subsequent to 1870 there is surprisingly little variation around the 1870-2000 average growth rate of 1.81 per year, a rate sufficient to double the standard of living every 38 years. The major acceleration above the long-run trend comes, surprisingly, not in the early postwar years but in the decade 1963-73, followed by a retardation back to trend in 1987-94.