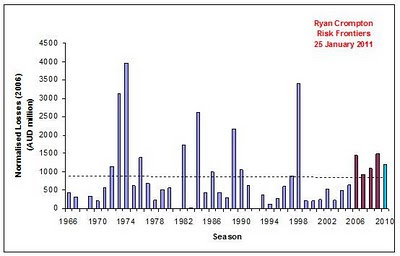 [UPDATE: The data in the graph above was updated on 31 January 2011 and presented here.]

Ryan Crompton at Macquarie University has updated the Crompton and McAneney (2008) analysis of disaster losses in Australia to account for the estimated losses from the 2011 Brisbane floods, as well as each of the years following their analysis to the present.  You can see the results in the figure above.  The figure shows meteorological disasters (bushfire, flood, hailstorm, thunderstorm, tropical cyclone) for the period 1966 to present using an apples-to-apples comparison of losses across hazards.

Here is a note that Ryan sent me which explains the figure:


The figure shows the Crompton and McAneney (2008) Figure 2(b) adjusted to include the seasons 2006/07 - 2009/10 and the loss from the recent Queensland floods (the only loss included in the current 2010/11 season). The losses in the four complete seasons added to the time series have been normalised to 2005/06 values as per Crompton and McAneney (2008) so that losses have been reduced from their original values for consistency with the other data. The Insurance Council of Australia (ICA) has released updated figures (PDF) on the insurable losses in Queensland as a result of flooding, with the current estimate at $1.2 billion. With the final loss from this event not yet known and likely to increase, the original loss of $1.2 billion has been included in the above figure rather than the equivalent 2005/06 normalised value (which would be a bit lower).

You can find Crompton and McAneneny (2008) here, and if you do not have access to that journal you can read a very nice summary of that work here in PDF.

Writing with Kevin Roche, John McAneneny discussed lessons of the recent floods in a op-ed:


The city of Brisbane, like many other towns in Queensland, is built on a floodplain.

Compared with the current disaster, there have been even bigger floods in the past: in 1841 and 1893 when flood waters topped 8.35 meters, some 3.9 m above the latest peak.

After the 1974 floods, the senior engineer with the Hydrometeorology Branch of the Bureau of Meteorology, G. Heatherwick, warned that heavier rainfalls were possible over the Bremer river catchment with higher flooding in Ipswich, independent of the flood mitigation effects of the Wivenhoe Dam.

This is not to deny that climate change is a real concern: few continue to believe that only positive outcomes will arise from the continued heating of the planet.

The latest research, however, just published in the international journal Environmental Research Letters by Ryan Crompton, Roger Pielke Jr. and John McAneney suggests that it may be centuries until we can be confident that climate change is influencing disaster losses.

If we truly wish to reduce the scale of future disasters in Australia, we need risk-informed land planning policies with risks appropriately priced by an active insurance market.

In simple terms, for flood and bushfire, this means an end to unmanaged development of flood plains or within bushlands.

In the Black Saturday fires, studies by Risk Frontiers showed that 25% of the home destruction in the most affected towns of Marysville and Kinglake took place physically within bushlands; 60% occurred within 10 m of bushland boundaries.

At these distances, chances of home survival are low and not surprisingly few resisted the flames.

At the beginning of last century, lives and property were lost as people lived and worked in the bush; today the problem remains as people chose to live in or near the bush for lifestyle reasons. The analogy to floodplains is obvious.

Extreme weather is not new to Australia with some 95% of all property losses in natural disasters since 1900 attributable to flood, hail, bushfire or tropical cyclones.

However, excluding the case of improved construction standards for residential homes in cyclone-prone areas of the country, successive Australian governments, at all levels, have failed to address shortcomings of land policy solutions to mitigate against the potential impacts of natural disasters.

In the emotive days after the Black Saturday fires of 2009, the then Australian Prime Minster, Kevin Rudd, stated that we would rebuild impacted communities "brick by brick."

There was no immediate consideration about reducing risks. Let's hope the official reaction to these floods is more measured.