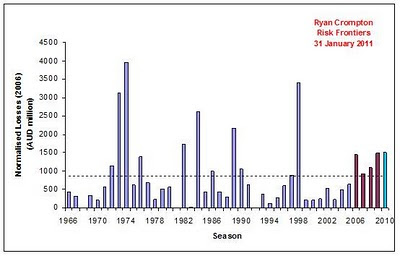 Courtesy Ryan Crompton, the figure above shows the most recent insured loss estimates from the recent Queensland flooding based on an update from the Insurance Council of Australia (here in PDF).  The estimated costs of the flood have increased from A$1.2 billion to A$1.51 billion (and shown as the bright blue bar on the far right of the figure above -- and is not normalized (the normalized values would be lower) -- the other data shows the normalized losses from Crompton and McAneney 2008 updated through 2010, more details here).

Writing in the Sydney Morning Herald, Ross Gittins offers a valuable perspective on the economic magnitude of the losses from the Queensland floods.  I'll skip over the issues of domestic politics that he discusses to focus on the comments that he makes about the magnitude of the losses.  He provides a useful bit of advice, which is exactly the advice that I give to my students (emphasis added):


The wise and much-loved econocrat Austin Holmes used to say that one of the most important skills an economist needed was ''a sense of the relative magnitudes'' - the ability to see whether something was big enough to be worth worrying about.

That sense has been absent from the comments of those business and academic economists on duty over the silly season, happily supplying the media's demand for comments confirming the immensity of the floods' economic and budgetary implications.

Gittins then gets into the numbers:


If this is the most expensive natural disaster in Australian history, all it proves is the cost of earlier disasters was negligible. If you can ''rebuild Queensland'' for just $5.6 billion, it must be a pretty tin-pot place.

Note that, though no one's thought it worthy of mention, the $5.6 billion in spending will be spread over at least three financial years, making it that much easier to fund.

We know that more than a third of the $5.6 billion will be paid out in the present financial year with, presumably, most of the rest paid in 2011-12. So just how the flood reconstruction spending could threaten the budget's promised return to surplus in 2012-13 is something no one has explained.

And if $5.6 billion isn't all that significant in the scheme of things, how much less significant is the $1.8 billion to be raised from the tax levy? The fuss economists have been making about it tells us more about their hang-ups over taxation than their powers of economic analysis.

It turns out that domestic politics are difficult to avoid!  But what about the possible GDP impacts?  Gittins explains:


Turning from the budget to the economy, Treasury's estimate is that the floods will reduce gross domestic product by about 0.5 percentage points, with the effect concentrated in the March quarter.

Thereafter, however, the rebuilding effort - private as well as public - will add to GDP and probably largely offset the initial dip. So the floods will do more to change the profile of growth over the next year or two than to reduce the level it reaches.

Most of the temporary loss of production will be incurred by the Bowen Basin coal miners. But, though it won't show up directly in GDP, their revenue losses will be offset to some extent by the higher prices they'll be getting as a consequence of the global market's reaction to the disruption to supply.

And despite all the fuss the media have been making over higher fruit and vegetable prices, Treasury's best guess is that this will cause a spike of just 0.25 percentage points in the consumer price index for the March quarter, with prices falling back in subsequent quarters.

So the floods do precious little to change the previous reality that, with unemployment down to 5 per cent and a mining investment boom on the way, the economy is close to its capacity constraint and will soon need to be restrained by higher interest rates.