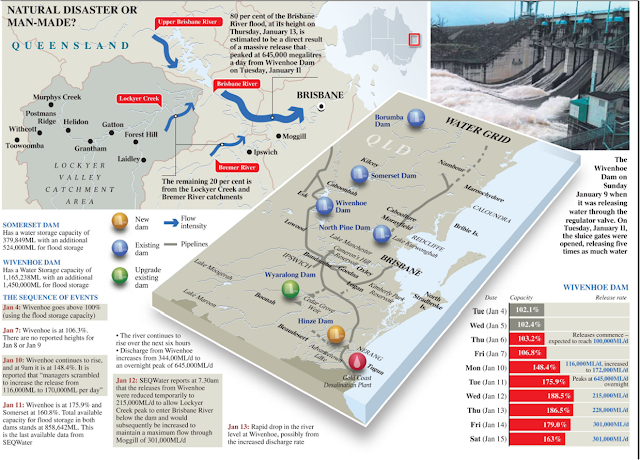 [Image from The Australian, see the original here in PDF]

Wivenhoe Dam near Brisbane, Australia is at the center of controversy in its role in the recent flood. The dam, as is commonly the case, is expected to serve two seemingly contradictory functions.  On the one hand it is a buffer against drought, meaning that it is desirable to keep it more full in the eventuality of low precipitation.  On the other hand, the dam is a buffer against floods, meaning that it is desirable to keep it more empty in the eventuality of heavy precipitation.  Since keeping the reservoir full and empty are not simultaneously possible, it then is necessary to balance these objectives.  Since future precipitation is uncertain, the dam's management is thus a matter of decision making under uncertainty (where risks are known) and ignorance (where they are not).

The Queensland government has initiated a high-level investigation of the dam's management during the flood.  It will focus on the decisions related to storage and release.  According to The Australian, publicly available evidence points to the dam management as a key factor in the magnitude of the Brisbane flood:


More than 80 per cent of the flood in the Brisbane River at its peak last Thursday was the direct result of the release from Wivenhoe, the city's flood shield, of up to 30 per cent of its capacity, according to official data obtained by The Australian. The data shows that, without the unprecedented and massive release at a peak rate of 645,000 megalitres a day from the dam on Tuesday, January 11, the flooding in Brisbane would have been minimal.

Andrew Dragun, an adjunct professor in economics at the Australian Rivers Institute, Griffith University and editor of the International Journal of Water, critqued the management of Wivenhoe as follows:


In the days before the flood, the BOM warned of an upper level low pressure system dumping a large amount of rain over southeast Queensland. The warning came late in the first week of January and was visible on the BOM interactive weather and wave forecast maps. Ironically, the system slowed off the coast for a few days, giving operators plenty of time to make any adjustments to capacity levels. But the gates remained shut on the 100 per cent capacity.

As the low system dumped rain, the operator opened the gates, releasing about 116,000 megalitres on Friday-Saturday, with releases of 100,000ML over the next two days. Despite these releases the dam level rose to 148 per cent by Monday last week.

By Tuesday, with the dam at 176 per cent, the operator released a phenomenal 645,000ML. The result was bound to be bad. Significant flooding and tears, all while Dannien expressed his "confidence . . . that everything happened the right way".

Consequently, the flood peaked in Brisbane on Wednesday at 4.46m. However, the inflows from the catchment were surging, and the dam reached a capacity of 191 per cent.

Anna Bligh admitted that the operators nearly lost control, with water only 90cm from spillway fuse plugs. If triggered, the plugs would have released a torrent of water to the system. The results could have been catastrophic.

Why didn't the dam operators empty the reservoir further in the days and weeks before the storm?

There appear to be at least two important  reasons. One has to do with the psychology of decision making:


Retired engineer Ian Chalmers, a key project supervisor in the construction of Wivenhoe Dam between 1977-85, defended the decisions of the operators in the past week, adding they will do a better job next time.

"These questions are all valid, but put it this way - you would have to have very large balls to [significantly reduce the dam's volumes in the months after the weather warnings] after 10 years of drought, because if you had got it wrong you would be accused of wasting the water," Chalmers said.

In other words, after 10 years of drought it would have been very easy to see a reservoir full of water not so much as a risk of flooding but instead as a buffer to risk of drought.  As well, imagine the outcry if the flood had not occurred and in the next prolonged dry spell, observers point back to all that water was allowed to flow downstream.  Chalmers is suggesting that it is understandable that the dam's operators erred on the side of protecting against drought rather than floods.

The second reason for not emptying the dam is that according to Professor Dragun the dam operators did not consider the state of the ENSO cycle, which has profound impacts on the Australian climate:


What have the Wivenhoe Dam operators been doing for the past couple of months? According to SEQ Water Grid chief Barry Dennien, dam levels were managed according to the rules and strictly by the operating manual. Dennien is comfortable that "everything happened the right way".

It seems the manual and the operator do not differentiate between the weather outlook of an El Nino (dry drought) and a La Nina (rain, flooding). After the drought, Wivenhoe reached 96 per cent of its supply capacity on March 16, 2010, and has been maintained at that level or higher since.

If it is in fact the case that Wivenhoe is managed without regard to ENSO, then this would be a case of decision making under willful ignorance, rather than decision making under uncertainty, as the ENSO signal is extremely strong in Australia and has a demonstrable influence on the probabilities of extreme (high and low) precipitation.  Thus, when Wivenhoe Dam operators say that they did everything by the book, they may indeed be correct, but at the same time "the book" may have led them astray.

While the Queensland flood inquiry will focus on hydrology and the dam's management, there will be deeper issues here of decision making under uncertainty and ignorance, and how such decisions should be made in the future.
Posted by Roger Pielke, Jr. at 1/18/2011 11:31:00 AM
Email ThisBlogThis!Share to TwitterShare to FacebookShare to Pinterest
Newer Post Older Post Home