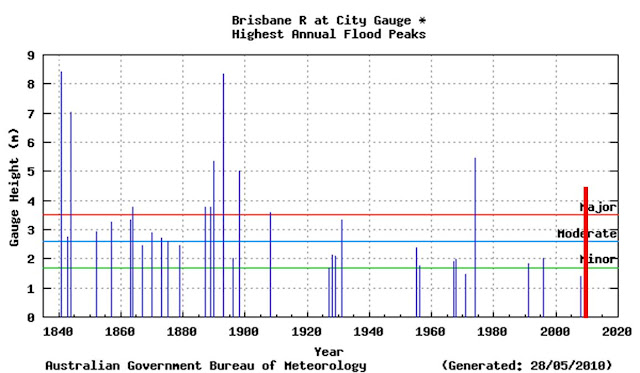 The graph above shows flood peaks in Brisbane from 1841 to 2011.  The data comes from the Australian Bureau of Meteorology, which published this chart in November 2010.  I added the red bar showing the peak of the current flood at the same location -- at about 4.5 m -- found at this site at the Bureau of Meteorology.

Here is how a BoM report (PDF) following the 1974 flood described the historical context, and offered a prescient warning (emphases added):


Prior to 1900 flooding occurred quite frequently at 1 to 8 year intervals and in one year (1893) four separate floods were recorded. Since 1900 flood rainfall has been much less frequent and the interval between floods has become much longer. Furthermore, dredging and other changes to the hydraulic character of the channel, together with the effect of Somerset Dam have reduced most floods in Brisbane in recent years and have eliminated the smaller floods. . .

. . . flooding is most common in the usual wet season months of January. February and March, and floods are rare from July to December.

The earliest flood recorded was in 1841. Its exact height is uncertain but it was said to be the highest flood known at that time. In 1857 (flood peak 4.42 m) a good deal of land, now the prestige suburb of St Lucia, but then a dense vine scrub, was submerged and in 1864 (peak 4.92 m) flood waters extended from the junction of Oxley Creek and the Brisbane River to the high land at the back of Coopers Plains, a distance of about 11 km. In the 1867 flood the original wooden bridge at the site of the Victoria Bridge was destroyed, and in January 1887 (peak 4.92 m) Bowen Bridge was washed away.

Three floods occurred during February 1893. During the first (peak 9.51 m) the ship Elamang and the gunboat Paluma were carried into and left aground in the Brisbane Botanical Gardens, and the ship Natone was stranded on the Eagle Farm flats. The Indooroopilly railway bridge and the north end of the old Victoria Bridge were washed away. Nine days later a second minor flood was experienced which attained a height of only 3.29 m. However, a week after that there was another major flood (peak 9.24 m) which carried the stranded Elamang, Paluma and Natone back into the Brisbane River!

Prior to January 1974 no flood this century had exceeded 4.5 m at the Brisbane Port Office. The last river flood of any consequence occurred in 1931 (peak 4.48 m), although in recent years there have been several severe floods in the Brisbane metropolitan creeks (in June 1967 and February and April 1972).

Because of changes in the physical characteristics of the river and its catchment, it is very difficult to calculate return periods for flooding in Brisbane. However, four floods well in excess of the 1974 levels have occurred in the past 133 years and, according to the Professor of Economic Geology at the University of Queensland (Professor Sergent), there is geological evidence of water levels 5.5 m higher than the 1974 flood in the Indooroopilly area of Brisbane.

Meteorological studies suggest that rainfalls well in excess of those recorded in the floods of 1893 and 1974 are possible. Therefore it seems certain that unless major flood mitigation schemes, such as the proposed Wivenhoe Dam, are implemented, floods even greater than those of 1974 will again be experienced in Brisbane.