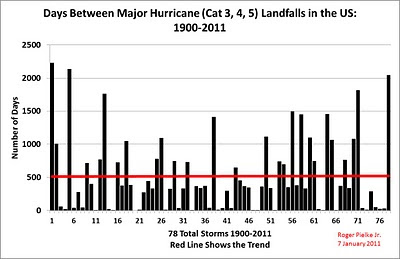 Today's NYT reports that while still a niche market catastrophe bonds are finding some increasing attention, as investors seek to diversify their risk.

“The fact that we demonstrated positive returns has been very helpful in getting new funds into the space,” said Paul Schultz, president of Aon Benfield’s investment banking division, which packages and sells catastrophe bonds. “We have more investors participating in this asset class than ever before. There’s a growing following and growing level of interest.”

Take a second look at the first paragraph above -- cat bonds outperformed the S&P 500 from 2007-2010.  What should we take from that?  Not much, other than the randomness of extreme events.

The graph at the top of this post shows the number of days in between major US hurricane landfalls, that is, storms of Category 3 or stronger strength, which are responsible for more than 85% of historical normalized damage.  The data comes from the ICAT Damage Estimator. The red line shows the (non)trend in this metric over the past 111 years.  There were 42 such storms in the first half of the record (1900-1954) and 37 in the second half (1955-2010).

What is interesting is that that presently we are in the midst of  the third longest period (over 1900-2011) during which a major hurricane has not hit the US, since 1915.  It will become the second longest streak if a major storm does not strike before August 31, 2011.

The fact that cat bonds outperformed from 2007-2010 in all likelihood reflects the present drought in major hurricane landfalls, a streak that will have to end sometime and perhaps in spectacular fashion.  Just as the market overreacted in 2005 after a single season that saw 4 major hurricane strikes, the market today risks overreacting in the other direction.  I don't run a hedge fund, but if I did, I'd be taking a good hard look at cat bonds to see if I could gain some leverage using that tried and true formula for success -- regression to the mean.
Posted by Roger Pielke, Jr. at 1/07/2011 09:36:00 AM
Email ThisBlogThis!Share to TwitterShare to FacebookShare to Pinterest
Newer Post Older Post Home