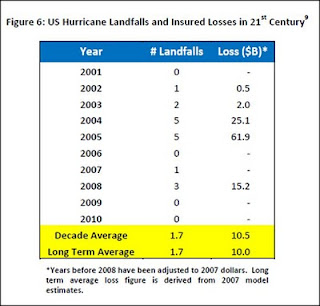 Karen Clark and Co. have released an updated report (here in PDF, the table shown above comes from the report) evaluating the performance of short-term predictions of US hurricane damage from catastrophe modeling firms (h/t ClimateWire).  Clark, one of the founders of the cat modeling industry, finds that the near-term cat model predictions have come up short


We have now completed the first five-year near term hurricane model projected period, and actual insured loss experience has been well below the level of the model predictions. Four of the past five years have had minimal insured property loss from Atlantic tropical cyclones, well below both the long term average and the (much higher) near term projections. To date, the catastrophe models have not demonstrated any skill in projecting near term hurricane losses.

The first decade of the 21st century was equal to the long term average with respect to hurricane landfall frequency and loss experience. This average decade was preceded by several decades of below average activity. This means the even the long term standard hurricane model activity rates are higher than what has been experienced since the models were first introduced in the 1980’s.

These conclusions reinforce the results of my analysis of  short-term landfall and damage projections (PDF).  The figure below comes from that paper and shows the historical record of US hurricane landfalls from 1851-2008.

There has been no upward trend in hurricane landfalls or damage over the period of available data.

To some degree the issue of short-term hurricane risk has become tangled in the debate over human-caused climate change and its long-term effects on hurricane behavior.  These issues should not be conflated for the simple reason that even taking predictions of a significant human influence on hurricane behavior as a given, it will be many, many decades before that signal can be seen in the damage record.  It is simply logical that a signal that cannot be seen for decades is not immediately relevant to judgments of near-term risk.

Make no mistake, even in the absence of a demonstrable signal from human-caused climate change there will be large losses from hurricanes in coming years, and there will be extended periods of above average losses.  In 2005 I warned of the possibility of a $500 billion hurricane by 2020.  Unfortunately, we cannot predict skillfully hurricane landfalls or damage on short-time scales.  The most recent five-year period underscores this reality.

In the context of the very large variability in hurricane behavior, the more important questions are thus not about climate change, despite the moth-to-a-flame-like attraction of that topic. Rather, the issue is one of risk management in the face of uncertainty and ignorance.

Insurance and reinsurance are not supposed to operate like games of chance, rather they are supposed to take chance out of the equation.  Rather than trying to do the impossible -- demonstrate predictive skill in hurricane losses on short timescales -- the industry might instead start thinking creatively about approaches to insurance and reinsurance that make the industry more robust, and less like a casino.

Here is the advice that I concluded my 2009 paper (PDF) with:


So what might a decision maker concerned about hurricane landfalls or damage over the next one to five years actually do?

The recommendation here is to start with the historical data as a starting point for judging the likelihood of future events and their impacts. Figure 6 shows the frequency of landfalling hurricanes per year for the period 1851–2008 (other time periods are shown in Table 2, and decision makers may wish to use a record that starts in 1900 for data quality reasons). Similarly, Figure 7 shows the same data but for running five-year periods from 1851 to 2008.

A decision maker may have reasons to hedge his or her views of these distributions in one
way or another, and (s)he will certainly be able to find a scientific justification for whatever hedge (s)he prefers (see Murphy, 1978).  However, it is important to recognize that any decision to adjust expectations away from those in the historical record represents a hedge. Reasons for hedging might include risk aversion or risk-seeking behaviour, a gut feeling, trust in a subset of the expert community, a need to justify decisions made for other reasons and so on. But at present, there is no single, shared scientific justification for altering expectations away from the historical record. There are instead many scientific justifications pointing in different directions.

Starting with the historical record allows for a clear and unambiguous identification of hedging strategies and justifications for them. An ability to distinguish between judgements that can be made based on empirical analysis and those that are based on speculation or selectivity is an important factor in using science in decision making. Such a distinction can also help to identify the role that financial or other interests play in the choice of relevant science in a particular decision process.

Given that the climate system is known to be non-stationary on various timescales, there are of course good reasons to expect that uncertainties may be larger than the variability observed in the past, given that the climate system can assume modes of behaviour not observed over the past century and a half. Each decision maker should carefully evaluate how unknown unknowns might influence their judgements. In addition to
decision making under conditions of uncertainty, decision makers need also to make judgements under conditions of ignorance, where uncertainties cannot be known with certainty.

Decision makers will continue to make bets on the future and, just like in a casino, some bets will prove winners and some will be losers. But over the long term those who do the best in the business of decision making related to hurricane landfalls and their impacts will be those who best match their decisions to what can and cannot be known about the uncertain future. And such wisdom starts with understanding the historical record and why the scientific community cannot produce skilful forecasts of future landfalls and damage for the foreseeable future.