Keeping Your Eye on the Ball

If you want to understand efforts to stabilize concentrations of carbon dioxide in the atmosphere you want to be paying attention to the amount of carbon dioxide emitted per unit of economic activity.  For over a century this ratio has been declinng -- the economy has been decarbonizing -- but in recent years the rate of this decline has slowed, as shown in the following figure. 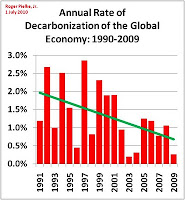 Stabilization of concentrations at a low level requires accelerated decarbonization to levels of 5 or 6 percent per year, way above the top of the graph.  To understand why it is that decarbonization trends are moving in the wrong direction it is necessary to understand the carbon intensity of energy generation, which necessarily must decline if rates of decarbonization of the economy are to increase.

The only way for the carbon intensity of energy generation to decline in the long-term will be for carbon-intensive fossil fuels to be replaced by very low carbon alternatives.  Switching from coal to natural gas can accelerate decarbonization a bit, but not nearly enough.

It would thus seem pretty important to track the proportion of global energy consumption that comes from low carbon sources.  Remarkably (at least to me), this is not done by any leading organization in the US or internationally in a manner that is readily accessible (but perhaps someone will correct my impression).

I have found data from the Renewable Energy 21st Century Policy Network that indicates that in 2008 the world had a primary energy consumption from non-hydro renewables of 219 million tonnes of oil equivalent (Mtoe) (from footnote 1 in this report in PDF).  According to BP's historical data on primary energy consumption (here in XLS, which does not track renewables) the world in 2008 consumed a total of 11,315.2 Mtoe -- from fossil fuels (9,963.6 Mtoe), hydro (731.4 (Mtoe) and nuclear (620.2 Mtoe).  Thus, carbon neutral sources of energy consumption represented 13.9% of the 2008 total.  Non-hydro and non-nuclear sources represented 1.9% of the total. (Biomass is neglected in these numbers.)

To achieve stabilization of carbon dioxide concentrations at a low level the proportion of primary energy consumption from conventional fossil alternatives will have to increase from 13.9% to above 90% (which in round numbers means the equivalent deployment of a nuclear plant per day of carbon-free energy).  I suspect, but do not know, that 2010 will see this ratio decrease (i.e., go the wrong way) from 2008.  Who is tracking this data?
Posted by Roger Pielke, Jr. at 1/04/2011 08:37:00 AM
Email ThisBlogThis!Share to TwitterShare to FacebookShare to Pinterest
Newer Post Older Post Home