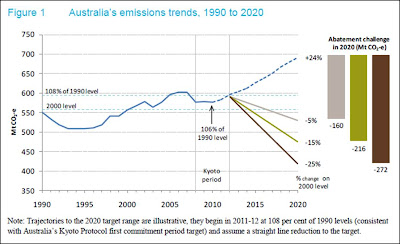 The image above comes from a report issued today by the Australian government on its projected carbon dioxide emissions compared to various targets for emissions reductions (here in PDF).  The gap between projection and targets is stark.  The report asserts:


The Australian Government has reiterated its intention to introduce a carbon price in Australia to reduce emissions and meet the 2020 target.

What would it take for Australia to meet the least ambitious of these targets?  I answer this question in a recent paper:

The Australian targets imply that Australia would have to achieve the 2006 emissions intensity of Japan by 2016 for a 25% reduction target, by 2018 for a 15% reduction target or 2020 for a 5%reduction target. Japan has a highly efficient economy on several small islands with almost no domestic energy resources. Japan also operates the third most nuclear power plants after the United States and France. In other words, in many important respects Japan could not be more different than Australia in terms of the role of emissions in its economy. To think that Australia could achieve Japanese levels of decarbonization within the next decade strains credulity.

What would meeting the 5% target mean in terms of clean energy deployment?


In 2004 Australia produced 0.83 t of carbon dioxide emissions per $1000 (US) (essentially the same as in 2006). For this to be cut in half over the next decade or less – as implied by the 5%, 15% and 25% 2020 targets – would require that nearly all Australian coal consumption be replaced by a zero-carbon alternative such as nuclear or renewable. If an average nuclear plant provides 750MW of electricity (World Nuclear Association, 2007) and one quad is equivalent to 11,000MW of electricity (produced over one year, American Physical Society, 2010) then about 15 nuclear power plants would provide one quad. Coal provided 2.4 quads for Australia in 2004, meaning that this could be replaced by about 35 nuclear power plants.

Of course, Australia’s energy consumption has increased since 2004 and is expected to increase in the future. If Australia’s demand for energy increases by 1.5% per year to 2020 then an additional 1.4 quads of energy will be needed, implying the equivalent of 21 additional nuclear power plants, or a total of 56. . .

Several Australian readers of an early version of this paper commented that a comparison of nuclear power plant equivalents, even if hypothetical, would not make much sense to many readers as Australia has a long history of opposition to nuclear power plants. The same sort of hypothetical sensitivity analysis can be conducted with technologies based on existing solar power plants. The [proposed] Cloncurry Solar Thermal Power Plant in Queensland is expected to provide 10 MW of electricity when completed (Renewable Energy Development, 2008). One quad (at 33% efficiency) of energy implies 3333 Cloncurry plants. Providing 3.8 quads implies 12,667 Cloncurry equivalent plants, or about 24 such plants coming online every week from 2010 to 2020.

What this sensitivity analysis clearly indicates is that under a wide range of scenarios Australia would need to undertake a herculean effort comparable to the level of effort required to build and put into service dozens or more nuclear power plants by 2020 or thousands of solar thermal plants. Were this ‘‘level of effort’’ to be expressed in terms of windmills or other existing technologies the magnitude would be equally as daunting. When coupled with very aggressive efficiency and renewable objectives the level of effort is still enormous. Australia, of course, has no nuclear power plants, and the technology is hotly debated, so even building one plant would be an enormous achievement.

Contrary to the Australian government's official position, carbon pricing is not going to make the target achievable. Of course, Australia is certainly not at all unique among nations in having a proposed policy for emissions reductions that is doomed to fail.  Australia's failure is just a bit easier to see as time goes by and the numbers show what the numbers show, which inevitably means that a discussion of alternative approaches to climate policy will soon be necessary.  And that is a good thing.
Posted by Roger Pielke, Jr. at 2/08/2011 04:12:00 PM
Email ThisBlogThis!Share to TwitterShare to FacebookShare to Pinterest
Newer Post Older Post Home