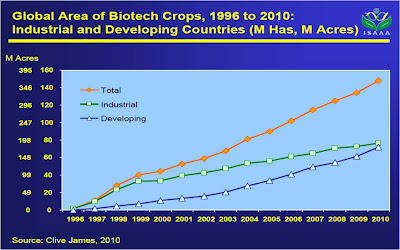 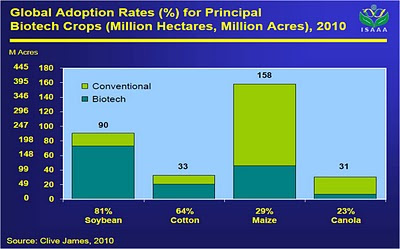 The International Service for the Acquisition of Agri-Biotech Applications (ISAAA) -- a catchy organizational name -- has issued a report on the global status of genetically modified crops, or as the ISAA likes to call them, biotech crops.  The numbers that it reports are pretty remarkable.  The two figures above come from the report and show the growth in areal extent (top), and the adoption rates by crop (bottom)

Here is an excerpt from the executive summary of the report (emphasis in original) which provides some aggregate numbers:

A record 87-fold increase in hectarage between 1996 and 2010, making biotech crops the fastest adopted crop technology in the history of modern agriculture

The ISAAA, which clearly champions biotech crops, explains why they think these crops are so important in terms of innovation, and singles out the EU as a laggard:


It is evident that the world’s economic axis is shifting in favor of the emerging nations of the world, and this has implications for the development of all products, including biotech crops. Increased participation in innovative approaches in plant biotechnology is already evident in the lead developing countries of BRIC – Brazil in Latin America, and India and China in Asia. Emerging countries are no longer satisfied to have only low labor costs as their only comparative advantage, but operate dynamic incubators of innovation, producing new and competing products and employing innovation to redesign products for customers at significantly lower cost, to meet fast growing domestic and international demands. Thus, “frugal innovation” is not only an issue of cheap labor but increasingly will apply to the designing and redesigning of more affordable products and processes which will require both technological and business innovation.

All this implies that the western world may be losing out to the emerging countries, but this is not necessarily so. Of the Fortune 500 companies, 98 have R&D activities in China and 63 in India, and these include collaborative efforts on biotech crops with both public and private partners in their respective host countries. The philosophy underlying these investments by the multinationals in the developing country BRICs is that they will retain a comparative advantage in innovation, in addition to being well placed to participate in the new markets that will be developed to meet the needs of an increasingly wealthy population of more than 2.5 billion in their home countries. This compares with only 303 million in the US and 494 million in the 27 EU countries. Given that the nature of innovation is to feed upon itself, “innovation in the emerging world will encourage rather than undermine innovation in the western world” (The Economist, 15 April 2010).

The current unprecedented explosive growth and change occurring in the emerging countries will have enormous implications for the rest of the world, and will demand more innovative solutions from successful developers. The global share of the emerging world’s GDP increased from 36% in 1980 to 45% in 2008 and is predicted to reach 51% by 2014. In 2009, productivity in China grew by 8.2% compared with 1.0% in the US and a decline of 2.8% in the UK. Emerging country consumers have outspent the US since 2007 and are currently at 34% of global spending versus 27% in the USA. Thus, emerging country consumers are, and will continue to demand a better quality of life including a better diet, with significantly more meat, which in turn drives increased demand for the principal biotech feed stocks, maize and soybean.

Consistent with other lead countries of the world, the policy guidelines of the EU strongly promote innovation as a general policy in science but it has chosen not to practice what it preaches when it is applied to biotech crops – one of the most innovative approaches to crop technology. If innovation is the key to success with crop technology this could seriously disadvantage the EU. Some multinationals involved in crop biotechnology have already reduced  R&D activities in some EU countries and, where possible, are relocating activities to outside the EU because it does not provide a congenial environment for the development of biotech crops which are viewed in the EU as a threat and not as an opportunity.

Whatever you might think about GM crops, they appear to be here to stay.  It seems only a matter of time before the EU follows the US, Asia and South America in their adoption.  I'll venture that pretty soon we'll all be calling them "biotech crops."
Posted by Roger Pielke, Jr. at 2/23/2011 12:24:00 PM
Email ThisBlogThis!Share to TwitterShare to FacebookShare to Pinterest
Newer Post Older Post Home