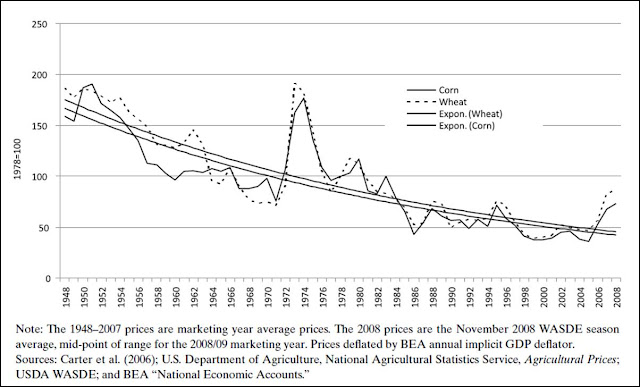 Paul Krugman joins the crowd who think that they can see the signal of greenhouse emissions in noisy, short-term data on food prices, and then construct a chain of causality to the ongoing unrest in the Middle East.  Such tenuous claims of attribution have about as much scientific standing as Pat Robertson saying that Hurricane Katrina was the result of the vengeful wrath of God.

Here is what Krugman writes today:


[T]he evidence does, in fact, suggest that what we’re getting now is a first taste of the disruption, economic and political, that we’ll face in a warming world. And given our failure to act on greenhouse gases, there will be much more, and much worse, to come.

The figure at the top of this post is from a paper by Daniel Sumner, of the University of California-Davis (here in PDF), in which he seeks to place the 2006-2008 increase in grain prices into historical context.  Current grain prices are at a similar level to the peak in 2007.  Sumner's paper also has a figure going back to the mid-1800s.  Good luck disentangling a long-term climate signal in the long-term data, which shows a significant decline in grain prices, much less attributing such a signal to a particular cause. Efforts to link short-term wiggles to the effects of greenhouse gas emissions go well beyond the canons of empirical science, to use a polite euphemism from The Climate Fix.


The percentage price increases for grains from 2006 through 2008 were among the largest in the 140-year history for which U.S. data are readily available (figure 2). That said, at the end of 2008, real prices of grain remained near those of just two decades earlier (figure 3). Government policymakers often fail to appreciate the strength of forces driving commodity prices, and policies often exacerbate market imbalances or use commodity market flux as a rationalization for income transfers to favored groups. Looking forward, relatively minor demand-side adjustments to biofuels policy may allow grain prices to moderate significantly. However, assured renewal of longterm productivity growth requires renewed commitments to investments in agriculture science.

Like Pat Roberson's attribution of Katrina to the wrath of God in punishment for our sins, Krugman's attribution of unrest in the Middle East to the wrath of Climate in punishment for our sins is in one sense just emotive commentary from an uninformed pundit. On the other hand, to the extent that Krugman's views shape policy, they are simply misguided and misleading.

Make no mistake, there are plenty of good reasons to accelerate the decarbonization of the global economy, for climate and non-climate reasons. But anyone who thinks that action on greenhouse gases provides a meaningful lever to influence food prices, much less unrest in the Middle East, has lost all perspective. We'd be just as well off praying for the forgiveness of a vengeful God.
Posted by Roger Pielke, Jr. at 2/07/2011 06:54:00 AM
Email ThisBlogThis!Share to TwitterShare to FacebookShare to Pinterest
Newer Post Older Post Home