This Quote Cannot be Accurate 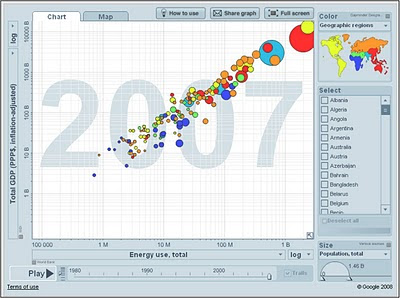 An article on energy efficiency over at Yale e360 has this quote allegedly from Energy Secretary Steven Chu:


"it’s a myth that the wealth of a country is proportional to its energy use."

I do not believe that this can possibly be an accurate quote, for the simple reason that it is wrong (and I can find no evidence of it online other than in the Yale e360 story).  The figure at the top of this post comes from Gapminder (the exact graph can be found here), and shows the very strong relationship of the wealth of a country to its energy use.  No myth.

UPDATE: A colleague emails to suggest that a linear-linear graph might show something different.  Good question, it does not.

UPDATE 2: Here is the source of the quote, a few minutes into Steven Chu's 2008 speech at the National Clean Energy Summit.

Chu is clearly saying that beyond a certain level energy use, metrics of quality of life (and he shows a graph using the Human Development Index) do not increase proportionately to increases in energy consumption. I have no problem with such a claim. However, it is highly misleading to reduce that to "it’s a myth that the wealth of a country is proportional to its energy use" absent the broader context, as was done at Yale e360. Thus, the quote is accurate but used improperly. The wealth of a country is indeed proportional to its energy use, which is quite different than saying, once you are very wealthy, consuming more energy does not increase proportionately indicators of quality of life. Thanks to the folks at Yale e360 for quickly responding to my query!
Posted by Roger Pielke, Jr. at 2/10/2011 01:35:00 PM
Email ThisBlogThis!Share to TwitterShare to FacebookShare to Pinterest
Newer Post Older Post Home