What's a Science Advisor For? 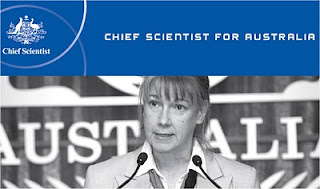 The Chief Scientist for Australia, Penny Sackett, resigned this week halfway into her five-year term, citing personal and professional reasons.  The Australian media has reported that during her tenure Professor Sackett met with Kevin Rudd once and has never briefed Julia Gillard. In a Senate hearing yesterday, Professor Sackett downplayed any conflict.

Even so, the distance from top level policy making is at distinct odds with how the position of Chief Scientist is officially described (PDF):


The Chief Scientist for Australia, Professor Penny D Sackett, provides high-level independent advice to the Prime Minister and other Ministers on matters relating to science, technology and innovation. . . While responsive to requests from Government for advice generated as a result of emerging issues, Professor Sackett also provides proactive advice to the Prime Minister on issues she deems important in securing Australia’s wellbeing into the future.

Nature reports the views of a few leading Australian scientists on the role of Chief Scientist:


“I don’t think the chief scientist’s role is very highly regarded by Australian governments,” said Peter Doherty, a Nobel prize-winning immunologist from the University of Melbourne. Doherty said Sackett was a victim of the new political landscape in Australia that evolveed while she was in office, largely shaped by the fact that the government is now in a minority. “I think new appointee would have to be pretty naïve going into this parliament if they thought they were going to make much of a difference, except on something the government is already looking to do, such as putting a price on carbon.”

“I suspect that Penny Sackett probably signed up for a job that was different to the one that she ended up having to do,” agreed materials scientist Cathy Foley, president of the Federation of Australian Scientific and Technological Societies, who served with Sackett on the Prime Minister’s Science, Engineering and Innovation Council. “I think when it comes to policy development, science has been the loser for the sake of political concerns.”

From 2005-2007 I conducted interviews of 7 former science advisors to the US president, who had served presidents from Lyndon Johnson to George W. Bush.  What we learned from them suggests that we should not be too surprised by what has happened in Australia. Our analysis of those interviews concludes as follows (PDF):


When quizzed about what improvements could be made to the role of chief scientist, Professor Sackett said it was the Government's responsibility to clarify what role the chief scientist should play.

"I think the responsibility rests firmly with the Government to make it, to decide how the role of chief scientist for Australia will fit into the variety of advice that it receives on matters of science"