In recent years, as developed economies have seen downturns in their economic growth due to the global financial crisis, an inevitable consequence has been a corresponding decrease in carbon dioxide emissions. It would be tempting to conclude that based on the decrease in emissions, the 2020 UK Climate Change Act target is now easier to reach. However the lesson that should be drawn is the folly of relying solely on carbon dioxide emissions as a policy metric, since emissions are so tightly coupled to economic growth.

I illustrate this with the following graph which provides an update to Figure 2 in my 2009 paper on the UK Climate Change Act. 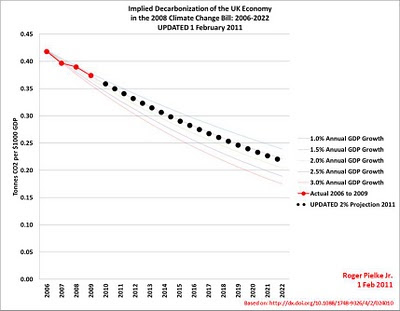 The figure shows the analysis as presented in the paper (the five transparent lines in the background corresponding to different projected rates of economic growth) which was based on GDP and carbon dioxide data through 2006.  I have updated the analysis through 2009 using updated data from Maddison and EIA (note that for 2009 I assumed a 4.9% decrease in UK GDP based on official data from the UK government here in PDF).

The four red dots connected with the red line show actual decarbonization of the UK economy from 2006 to 2009.  This data is encouraging as it shows a significant rate of decarbonization during the economic crisis.  It is not directly comparable to the dim lines underneath since GDP growth (contraction) fell outside the bounds of my 2009 analysis. The dashed black line shows the rate of decarbonization implied by a 2.0% GDP growth 2010 to 2022, based on the updated data.  There is some reason to believe that 2010 actually saw a recarbonization of the UK economy, which would imply that the next red dot would be higher than the one for 2009 -- we shall see when official data is released.

Regardless what happened in 2010, the implication of the updated graph is virtually identical to the conclusions that I reached in the 2009 paper and in The Climate Fix:  To be on target to meet its 2020 emissions reduction target the UK needs to become as carbon efficient as France by no later than 2015, under any positive future GDP growth.  The reduction in emissions in 2009 do not alter that conclusion. The overall sense I get from media reports is that this reality is generally, if not universally, understood.

Now for something interesting that I cannot explain [UPDATE: See the comments for a valuable exchange with the ever-helpful Harrywr2.].  I routinely use the US EIA data on carbon dioxide emissions, because it is authoritative and they use an apples-to-apples approach for all countries around the world, enabling comparative and aggregated analysis.  But when comparing the US EIA data with the official data from the UK (here in PDF) there is a distinct bias -- the UK has its emissions growing at a considerably slower rate than does EIA, as shown in the following figure. 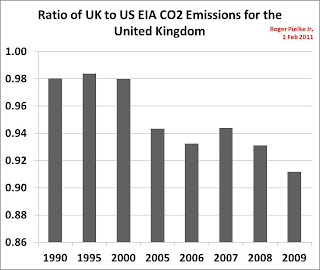 A comparison of the data sets shows that the figures for 1990 through 2000 differ by 2% or less. For 2009 they differ by about 7% with the UK government figures lower than US EIA.  I can't explain the difference. Obviously, accounting practices make a big difference for policy evaluation. I suppose that it would be possible for the UK government to meet its targets via changes in accounting rather than via changes in rates of decarbonization in the actual economy.  So perhaps reaching the targets implied by the UK Climate Change Act is getting easier after all.
Posted by Roger Pielke, Jr. at 2/01/2011 12:54:00 PM
Email ThisBlogThis!Share to TwitterShare to FacebookShare to Pinterest
Newer Post Older Post Home