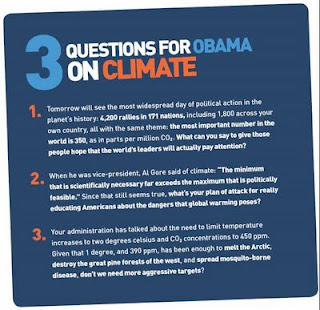 I watched President Obama's speech at MIT and here are a few reactions (viewable here for those who did not catch it live). First, the President is clearly not interested in addressing the interests of liberal Democrats on energy and climate change. Obviously the Administration reads polls. I heard the phrase "climate change" only 2 or 3 times and "cap and trade" was nowhere to be found. His endorsement of the Senate climate bill was pretty weak, spending about 20 (50?) times the effort discussing the stimulus package. I will be interested to see how advocates for cap and trade react to the speech. Some environmental groups preemptively protested the speech, such as 350.org which included the box on the right in an ad in today's MIT Student newspaper (pdf).

The most important aspect of the speech is that it shows how things are changing in this debate. Climate policy is rapidly becoming a much larger debate about energy policy, which stands on other legs, like security and economics. Issues about the political significance of who believes what about what on various aspects of climate science will not disappear of course, but will increasingly be relegated to angry corners of the blogosphere, where such debates belong. The evolution of climate policy to decarbonization policy is well underway, and that is a good thing.
Posted by Roger Pielke, Jr. at 10/23/2009 11:23:00 AM
Email ThisBlogThis!Share to TwitterShare to FacebookShare to Pinterest
Newer Post Older Post Home