Tornado Losses in the United States 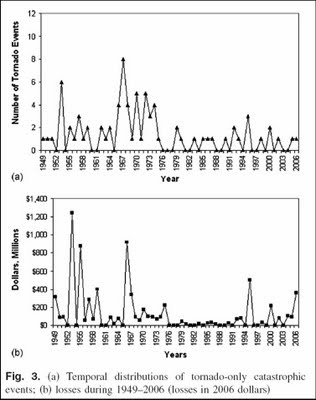 Stan Changnon (a past collaborator of mine) has a new paper out in Natural Hazards Review titled, Tornado Losses in the United States (PDF). In it he concludes:

The 58-year time trends for the number of catastrophes and for losses of tornado-only catastrophes showed no upward trends with time and are not suggestive of increases potentially related to global climate change.

The figure above shows this data, with the economic losses adjusted according to a normalization methodology that Chris Landsea and I first proposed in 1998 (PDF), and it is described in the text as follows:

A new measure of tornado losses has been developed using recently available data from a different source, the property-casualty insurance industry. This industry has identified all weather events causing $1 million or more in losses since 1949 and labeled as catastrophes. . .

Fig. 3a presents the annual frequencies of tornado-only catastrophes during 1949–2006. The annual average incidence was 1.4 with a maximum of eight events in 1967 and none occurred in 20 years. The 58-year values exhibit a downward trend over time. The annual loss values for tornadoes Fig. 3b also exhibited a downward trend over time. The annual average loss was $128 million, with a 1-year maximum of $1,243 million 1953 and no losses in 20 of the 58 years.

Changnon paper reinforces a 2001 study by Harold Brooks and Chuck Doswell titled,
Normalized Damage from Major Tornadoes in the United States: 1890–1999 that concluded:

We find nothing to suggest that damage from individual tornadoes has increased through time, except as a result of the increasing cost of goods and accumulation of wealth of the United States.