Understanding Decarbonization of the US Economy in 2008 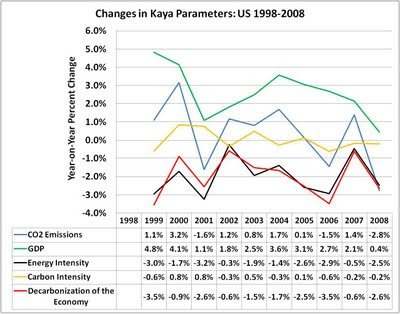 I have been asked by a reporter how to explain how much of the 2008 reduction in U.S. carbon dioxide emissions is due to changes in energy intensity and carbon intensity versus the slowdown in economic growth. The answer can be determined from the graph and figures above.

In 2008 year-over-year improvements (i.e., a smaller number is a larger improvement) in carbon intensity and energy intensity were slightly greater than the 10-year averages, but no where close to record levels. For instance, improvements were both smaller than in 2006, which had much higher economic growth and decreasing emissions. The data show that there is no evidence that there has been any departure from business-as-usual behavior of carbon intensity and energy intensity, and thus the overall decarbonization of the U.S. economy. Couple this with the fact that some of the changes in energy intensity and carbon intensity in 2008 were likely motivated by the state of the economy, there is no evidence of shifts in the U.S. economy that would lead to anything other than increasing emissions at business-as-usual levels (which was an 0.7% annual increase 1999-2007) as the economy recovers.

The calculations above come from the Kaya Identity, which says that: