Giant Fish, Big Fish and Minnows of the Liberal Blogosphere

Yesterday was sure interesting. Nothing like a little personal conflict to motivate dozens of emails to me and plenty of comments across the blogosphere. For better or worse I have a much better sense of how the liberal slime machine works in practice, having been inside now a bit. This is all the more ironic because I consider myself to be cut from a similar political cloth to many of those who are engaged in all out war against me. Here are a few reflections.

Among these big fish feeding the giant fish are Joe Romm, Brad Delong, RealClimate, and there are of course many others, but these are the ones I have first-hand experience with (lucky me). Each of these professionals has great potential to positively influence policy debates in positive ways. Instead they all actively have chosen to engage in pretty embarrassing and unethical behavior that caters to tribal, echo-chamber politics. Their behavior is not only a poor reflection on them as individuals but it serves to intensify partisan splits and actually work against effective policy making, as has been written about by Cass Sunstein and Clive Crook.

What do I mean when I say that they engage in embarrassing and unethical behavior? For instance, their blog etiquette is simply a disgrace, especially for people who claim to be professional, e.g., they each disallow substantive comments that they disagree with, either from me or from those supporting things that I have said. To provide an example, yesterday after I had accused DeLong of deleting comments from his blog he protested vehemently to me by email that:

My default is that everyone's comments are automatically published. (I do prune them later, if I think they are actively misleading. But I don't refuse to post.)

The screen shot below from DeLong's blog last evening (taken by an observer and sent to me by email this morning, thanks D!), do the comments look "actively misleading" to you? They are polite and on point. Yet they were immediately deleted by DeLong. Several other similar comments were "pruned" as well. Hey, it is DeLong's blog and he can run it like he wants, but to put forth a bald lie and then accuse me of "insanity" for pointing out that he actually deletes comments (when he does) takes chutzpah. 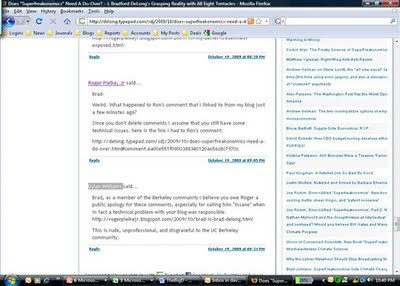 In the case of Romm and Delong they also engage in outright lies and character assassination. Neither links to my own words on my blog, apparently afriad of what might happen if people view what I have to say directly, rather than their cartoonish caricatures. Gavin Schmidt of Real Climate contacted my university once and demanded that they sanction me for opinions that he did not like on my blog, under a vague threat of harm to reputation. Joe Romm has ordered the media not to talk to me (given the response, I assume that the folks who listened to him were the same folks who feed him quotes;-). What is even more disturbing is how these folks interact on a personal level. I was completely taken aback by the unprofessional email responses I received from Brad DeLong yesterday. I have occasionally seen faculty members throw hissy fits in a faculty meeting, but never have I seen the degree of unprofessional behavior displayed routinely by professionals in the liberal blogosphere. What is with these guys?

But even the big fish apparently see some gutter behavior as not really becoming of professionals (though Romm doesn't seem to care), as to more effectively attack someone's reputation they also rely on the minnows of the blogosphere, people who see it as their sole job to "trash" someone's reputation via innuendo, fabrication and outright misrepresentation. Among these minnows are controversialist bloggers like Tim Lambert, who are professionally unqualified to engage in the substance of most debates (certainly the case with respect to my own work), yet earn their place exclusively by making mountains out of molehills (e.g., Lambert carpet bombs the internet with references to his post on the fact that I once botched a Google search, making insinuations of associated evilness in my soul) and ad hominem attacks (Pielke viciously attacked Al Gore!! Pielke is the Devil!!), without out once engaging the substance of my work (e.g., Al Gore agreed with my critique of his slide show and subsequently removed a slide from his show, I complemented Gore for his commitment to accuracy).

The big fish then feed on the minnows, for instance, Real Climate and Brad DeLong have cited Tim Lambert as an authority, including on my own work, yet to my knowledge Lambert has never actually engaged anything I've published in the peer reviewed literature much less any substantive arguments that I've made. Of course he doesn't -- he is not qualified to do so. Joe Romm just makes stuff up and even when shown to be in error he plows ahead. They then incestuously cite each other. This creates a valuable political smokescreen for the giant fish. The giant fish then get plausible deniability from engaging in what might seem to be less-than ethical behavior, the big fish get the ego-strokes of acknowledgment from the giant fish and the occasional top-line billing among favorable-leaning media. Similarly the minnows get to parlay inexpertise into a small role in the politics of personal destruction, and are cited by the big fish, but never by the media or the giants, which would be unbecoming.

So why me? Maybe I'm just lucky. But maybe it is because I have patiently and persistently built upon an academic record of peer-reviewed research on aspects of the climate that they disagree with, but cannot touch via conventional academic argumentation. Among the arguments I have made (with colleagues of course) in the course of arguing that human-caused climate change is a very real threat deserving of policy attention and resources to adaptation and mitigation:

1. There is no greenhouse gas signal in the economic or human toll record of disasters.
2. The IPCC has dramatically underestimated the scale of the stabilization challenge.
3. Geoengineering via stratospheric injection or marine cloud whitening is a bad idea.
4. Air capture research is a very good idea.
5. Adaptation is very important and not a trade off with mitigation.
6. Current mitigation policies, at national and international levels, are inevitably doomed to fail.
7. Current technologies are not sufficient to reach mitigation goals.
8. In their political enthusiasm, some leading scientists have behaved badly.
9. Leading scientific assessments have botched major issues (like disasters).
10. The climate science community is fully politicized.

Each of the above is of course open for debate. but oddly, my attackers never want to debate any of those topics, instead preferring instead to attack-the-man and attack-the-credibility. While such strategies speak loudly for themselves, I have no illusions that this is going to change. In fact, I expect it to get worse, as I have a major book on climate coming out next year that will be in bookstores everywhere. When that book comes out I am sure we can expect a feeding frenzy among the fish of the liberal blogosphere. It'll be fun. Stay tuned.
Posted by Roger Pielke, Jr. at 10/20/2009 07:06:00 AM
Email ThisBlogThis!Share to TwitterShare to FacebookShare to Pinterest
Newer Post Older Post Home