The "Shameful Article": A Review and Update 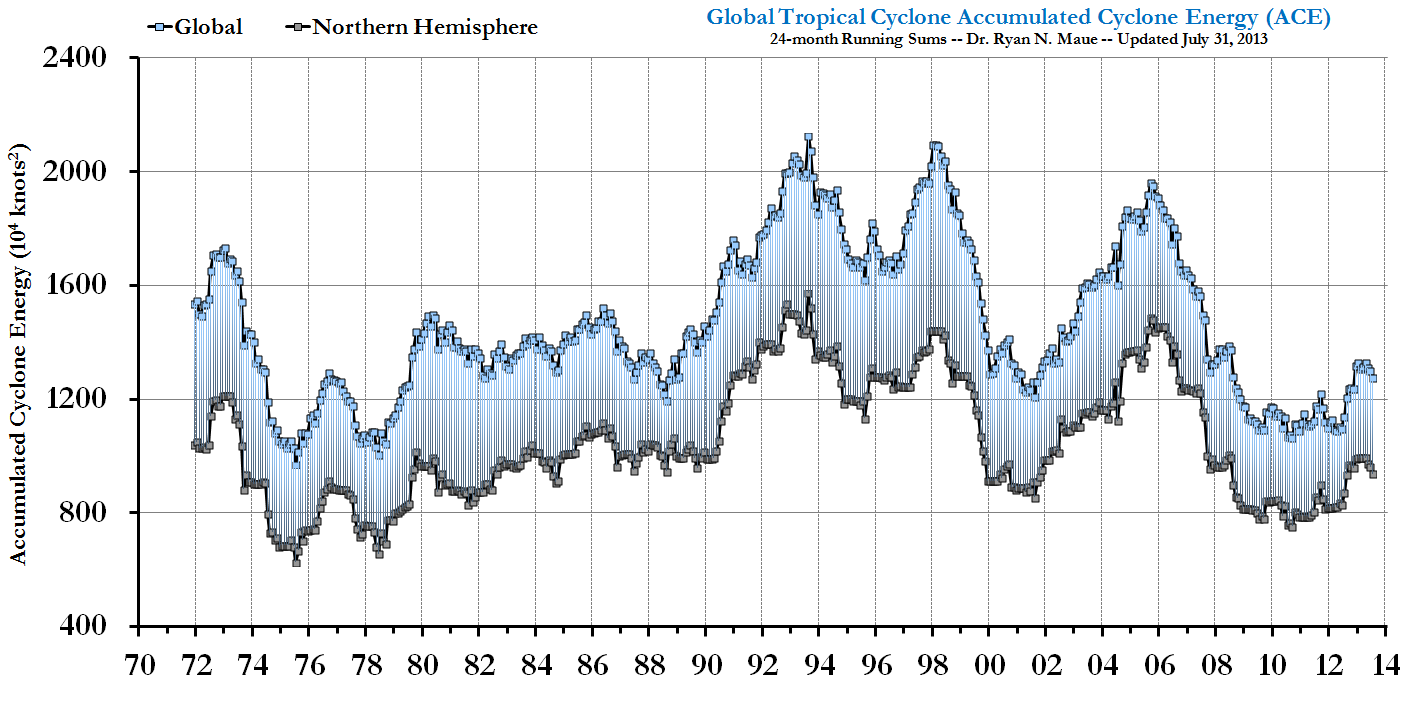 As the world continues to suffer a "depression" in global tropical cyclone activity with activity at 30-year lows, and hurricane forecasters try to keep busy while watching the listless Atlantic, I thought that for those who haven't been reading this blog for the past 5 years (which I assume is most everyone;-) it would be worth reviewing a bit of the history of the science on hurricanes and global warming, and how that science was ignored by the IPCC.

In 2004 and 2005 (before Katrina), I led an interdisciplinary effort to review the literature on hurricanes and global warming. The effort resulted in a peer-reviewed article in the Bulletin of the American Meteorological Society (here in PDF). Upon its acceptance Kevin Trenberth, a scientist at NCAR here at Boulder and the person in charge of the 2007 IPCC AR4 chapter that reviewed extreme events including hurricanes, said this in the Boulder Daily Camera (emphasis added) about our article:

I think the role of the changing climate is greatly underestimated by Roger Pielke Jr. I think he should withdraw this article. This is a shameful article.

Here is what the "shameful article" concluded:

To summarize, claims of linkages between global warming and hurricane impacts are premature for three reasons. First, no connection has been established between greenhouse gas emissions and the observed behavior of hurricanes . . . Second, the peer-reviewed literature reflects that a scientific consensus exists that any future changes in hurricane intensities will likely be small in the context of observed variability . . . And third, under the assumptions of the IPCC, expected future damages to society of its projected changes in the behavior of hurricanes are dwarfed by the influence of its own projections of growing wealth and population . . . While future research or experience may yet overturn these conclusions, the state of the peer-reviewed knowledge today is such that there are good reasons to expect that any conclusive connection between global warming and hurricanes or their impacts will not be made in the near term.

When Trenberth called the article shameful I responded on Prometheus with this comment:

Upon reading Kevin’s strong statements in the press a few weeks ago, I emailed him to ask where specifically he disagreed with our paper and I received no response; apparently he prefers to discuss this issue only through the media. So I’ll again extend an invitation to Kevin to respond substantively, rather than simply call our paper ’shameful’ and ask for its withdrawal (and I suppose implicitly faulting the peer review process at BAMS): Please identify what statements we made in our paper you disagree with and the scientific basis for your disagreement. If you’d prefer not to respond here, I will eagerly look forward to a letter to BAMS in response to our paper.

Climate change is a big deal. We in the scientific community owe it to the public and policy makers to be open about our debates on science and policy issues. We’ve offered a peer-reviewed, integrative perspective on hurricanes and global warming. I hold those with different perspectives in high regard — such diversity makes science strong. But at a minimum it seems only fair to ask those who say publicly that they disagree with our perspective to explain the basis for their disagreement, instead of offering up only incendiary rhetoric for the media. Given that Kevin is the IPCC lead author responsible for evaluating our paper in the context of the IPCC, such transparency of perspective seems particularly appropriate.

Not surprisingly the IPCC chapter that Trenberth led for the IPCC made no mention of our article, despite it being peer reviewed and being the most recently published review of this topic prior to the IPCC publication deadline (the relevant IPCC chapter is here in PDF). Even though the IPCC didn't see the paper as worth discussing, a high-profile team of scientists saw fit to write up a commentary in response to our article in BAMS (here in PDF) . One of those high-profile scientists was Trenberth. Trenberth and his colleagues argued that our article was flawed in three respects, it was,

. . . incomplete and misleading because it 1) omits any mention of several of the most important aspects of the potential relationships between hurricanes and global warming, including rainfall, sea level, and storm surge; 2) leaves the impression that there is no significant connection between recent climate change caused by human activities and hurricane characteristics and impacts; and 3) does not take full account of the significance of recently identified trends and variations in tropical storms in causing impacts as compared to increasing societal vulnerability.

Our response to their comment (here in PDF) focused on the three points that they raised:

Anthes et al. (2006) present three criticisms of our paper. One criticism is that Pielke et al. (2005) “leaves the impression that there is no significant connection between recent climate change caused by human activities and hurricane characteristics and impacts.” If by “significant” they mean either (a) presence in the peer-reviewed literature or (b) discernible in the observed economic impacts, then this is indeed an accurate reading. Anthes et al. (2006) provide no data, analyses, or references that directly connect observed hurricane characteristics and impacts to anthropogenic climate change. . .

In a second criticism, Anthes et al. (2006) point out (quite accurately) that Pielke et al. (2005) failed to discuss the relationship between global warming and rainfall, sea level, and storm surge as related to tropical cyclones. The explanation for this neglect is simple—there is no documented relationship between global warming and the observed behavior of tropical cyclones (or TC impacts) related to rainfall, sea level, or storm surge. . .

A final criticism by Anthes et al. (2006) is that Pielke et al. (2005) “does not take full account of the significance of recently identified trends and variations in tropical storms in causing impacts as compared to increasing societal vulnerability.” Anthes et al. (2006) make no reference to the literature that seeks to distinguish the relative role of climate factors versus societal factors in causing impacts (e.g., Pielke et al. 2000; Pielke 2005), so their point is unclear. There is simply no evidence, data, or references provided by Anthes et al. (2006) to counter the analysis in Pielke et al. (2000) that calculates the relative sensitivity of future global tropical cyclone impacts to the independent effects of projected climate change and various scenarios of growing societal vulnerability under the assumptions of the Intergovernmental Panel on Climate Change.

This series of exchanges was not acknowledged by the IPCC even though it was all peer-reviewed and appeared in the leading journal of the American Meteorological Society. As we have seen before with the IPCC, its review of the literature somehow missed key articles that one of its authors (in this case Trenberth, the lead for the relevant chapter) found to be in conflict with his personal views, or in this case "shameful." Of course, there is a deeper backstory here involving a conflict between my co-author Chris Landsea and Trenberth in early 2005, prompting Landsea to resign from the IPCC.

So almost five years after we first submitted our paper how does it hold up? Pretty well I think, on all counts. I would not change any of the conclusions above, nor would I change the reply to Anthes et al. Science changes and moves ahead, so any review will eventually become outdated, but ours was an accurate reflection of the state of science as of 2005. However, you won't find any of this in the IPCC.