A US Ethanol Waiver and the Price of Corn 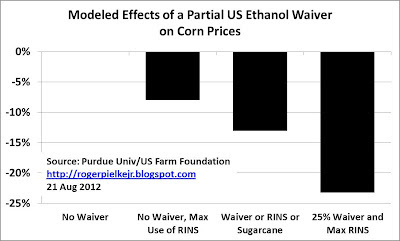 UPDATE: At The Washington Post Brad Plumer does a fantastic job explaining the Purdue/FF paper discussed in this post.

Today's FT says this in an editorial:


Passed by Congress in 2005, the Renewable Fuel Standard mandates fuel refiners to blend rising volumes of ethanol and other biofuels. For American farmers, the RFS has been spectacularly effective. Ethanol is expected to consume about 40 per cent of this year’s US corn crop...

In the short term, the Environmental Protection Agency has the ability to issue a waiver to the RFS if implementing it would “severely harm” the economy or the environment. The present conditions amply meet that requirement.

The biofuels industry argues, rightly, that the effect of waiving the RFS might not be immediate or dramatic. Refiners will still need large volumes of ethanol to meet fuel quality standards, so production would not dry up overnight.

RFS requirements can also be met using the tradeable credits known as Renewable Identification Numbers, issued when ethanol is produced. Because there is a substantial backlog of those credits, refiners can use them to meet their obligations rather than demanding physical ethanol, again blunting the effect of an RFS waiver.

Ethanol producers also point out that if output does fall, it will cut the supply of distillers’ grains, the protein-rich byproduct used as animal feed, so increasing demand for other crops such as soya.

Nevertheless, suspending the RFS would probably help ease corn prices – next year more than this. It would also send a signal that the US is not prepared to crucify mankind upon a cross of corn.

But what effect on corn prices might be expected from a waiver of the RFS? Academics at Purdue University affiliated with the US Farm Foundation have tried to answer this in a paper just out (here in PDF).

They explain their quantitative analysis as follows:

However, refiners and blenders may have some degree of flexibility in production. This is certainly true the longer the time horizon, so the question is to what extent it is true in the confines of one year. There is not a complete answer to that question, but many of the factors that will determine it are described above.

The next question: What would be the impact of a partial waiver under the assumption that refiners and blenders do have some flexibility in reducing ethanol use and substituting other octane and oxygen additives for ethanol to meet final product specifications? For this paper, estimates were done using a partial equilibrium model developed and used for previous ethanol policy work [5-9]. The model was updated, tuned according to recent observations, and modified for this work on drought impacts. The analysis was done for several levels of partial waiver or use of available RINs in 2013. As indicated above, it is unlikely any waiver will be issued for 2012.

The model for this analysis includes expectations before the drought with a full 13.8 BG RFS for 2013. Then it assumes the drought with three alternative ethanol blending levels: 11.8 BG, 10.4 BG, and 7.75 BG. For this analysis, it does not matter whether the reduced blending levels result because of the use of RINs or a partial waiver. However, the 11.8 BG level could be seen as no waiver and the use of 2 BG of RINs. (Use of some RINs in 2012 and surplus 2013 RINs carried forward to 2014 could limit the 2013 usage to around 2 BG.) The case of 10.4 BG represents 75% of the 13.8 BG RFS and could result through any combination of waiver, use of prior RINs, or use of sugarcane ethanol. The drought may reduce corn production 25% from pre-drought expectations, so EPA might consider a case that could reduce corn ethanol use through some combination of RINs and waiver by that same fraction. Finally, the case of 7.75 BG represents a waiver of 3.45 BG (25% of RFS) plus use of all the estimated available 2.6 BG of RINs, estimated to be the maximum possible ethanol reduction level if economic and technical hurdles could be overcome.

In the graph that appears at the top of this post, I have summarized the data in the last paragraph above (and as shown in the paper's Table 2) for the case of "stronger drought."

The analysis indicates that a partial waiver coupled with use of RINS credits could have a significant impact on corn prices (a reduction of >20%). However, a reduction in corn prices due to such policy action means a cascading series of impacts in the agricultural economic system (and beyond), starting with corn farmers themselves, as as the FT notes, with downstream effects on animal feed and corn substitutes.

Policy makers are fully aware that in the political process acts of commission are sanctioned more severely than acts of omission. Thus, the chances that the US will issue a waiver of any sort in 2012 appear unlikely, though I wouldn't be surprised to see a managed use of RINs and other technical instruments. The Purdue/FF analysis is thus an academic exercise in the short term, but an interesting one nonetheless, and perhaps relevant to efforts to tinker with the RFS down the road.
Posted by Roger Pielke, Jr. at 8/21/2012 10:58:00 AM
Email ThisBlogThis!Share to TwitterShare to FacebookShare to Pinterest
Newer Post Older Post Home