Damage Analogues and (Soon to be) Hurricane Isaac 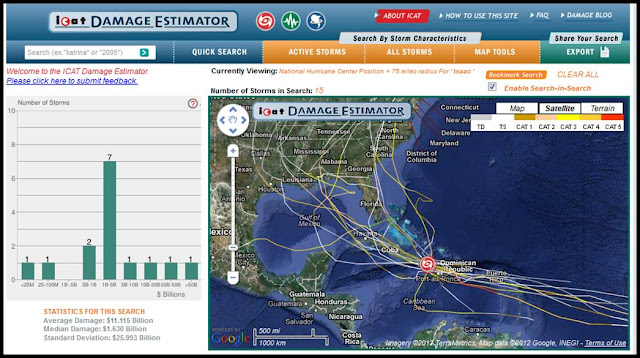 The image above comes from the ICAT Damage Estimator, a nifty online tool that allows you to compare (soon to be) Hurricane Isaac with historical analogues, including an estimate of what damage those analogues would have caused if they were to hit with this year's level of coastal development.The damage estimates are based on an update to the normalization methodology that we published in 2008. After what could have been much worse in Haiti, Isaac is now turning towards the Gulf of Mexico.

The image above shows all storms that have passed within 75 miles of Isaac's most recent NHC position and where they eventually made landfall. Most went to the west of Florida as Issac is predicted to track. The median historical damage from this set of analogue storms is $1.6 billion, with an incredibly wide range. Currently the NHC projects Issac to make landfall along the Gulf coast as a category 2 storm. There are 5 historical analogues in the set above with normalized damage ranging $1 billion (Georges, 1998) to $4.4 billion (Gustav, 2008). Category 3 and 4 storms have resulted in much higher damage. I'll update these numbers as Issac gets closer to the Gulf Coast.

You can play around with the ICAT Damage Estimator here.
Posted by Roger Pielke, Jr. at 8/25/2012 11:48:00 AM
Email ThisBlogThis!Share to TwitterShare to FacebookShare to Pinterest
Newer Post Older Post Home