Beer, Circuses and How Not to Fill a Tuition Hole

Colorado State University in Fort Collins is proposing to build a new stadium for its football team (visualized above). One of the central arguments for building the stadium is to increase out-of-state applications, the quality of the student body and raise more tuition revenue. A close look shows that the numbers just don't add up.

Frequent readers here will be aware of the dwindling support of university education by the State of Colorado. This leaves a situation where state institutions must figure out a way to fill a gap left by the reduced state support. How this is done is not complicated, as I wrote last year about my institution, the University of Colorado:

An interesting twist on this argument comes from Colorado State University, up the road in Fort Collins where my father was on the faculty for about 25 years. At CSU the administration is seeking to dramatically upgrade its athletic program.


[CSU President Tony] Frank has overseen a massive overhaul in the Rams' athletic department. He was dissatisfied with the department's direction, and also increasingly determined to use sports to help raise the university's national profile. The move comes at a time when national league realignment has significantly weakened CSU's conference, the Mountain West, making the highest priority — football prominence — even more of a challenge.

In the wake of a Stadium Advisory Committee's report last week that the controversial project is feasible, Frank said he will announce by early October his recommendation to the school's board about whether CSU should move forward with construction of a 42,000-seat, on-campus stadium. The new facility would replace the 32,500-seat, off-campus Hughes Stadium as the Rams' game-day home starting with the 2015 season.

Estimated cost: $246 million for the core project, planned for the south side of the campus. The SAC, headed by athletic director Jack Graham and school vice president Amy Parsons, said it had "roughly estimated" another $51 million in costs if previously cited features were included, including an alumni center, parking facilities and other buildings.

The stadium is only the tip of the iceberg:


Now Graham is hopeful of not only witnessing the Rams' move into a new stadium, but eventually a buildup of the athletic department budget — from the $23.5 million 2011-12 budget he inherited, to a planned $28.45 million in 2012-13, and to around $55 million a year at some point.

"The rest of this campus knows what excellence looks like," Graham said in his office at the Fum McGraw Athletic Center. "You go to our veterinary school, our agriculture school, our college of business. They don't settle for mediocrity. That is not what the culture's been like in our athletic department the last 10 years. ... I did not come here to babysit mediocrity. We're going to drive athletics to a level of excellence that reflects the standards of the rest of the university."

Frank outlines a vision for athletics in a speech here. One notable feature of the justifications being offered for the new stadium is tuition costs and out-of-state students:


Frank can rattle off stunning numbers about the increases in tuition at public universities over the past few decades, a result of both inflation and a precipitous percentage drop in state support, which traditionally subsidized much of the costs for in-state students. "Over that period, we've essentially been privatizing American public higher education," he said.

If the trend continues, Frank said, state support could completely dry up in the next 20 years. He views his mission as positioning CSU — which has an enrollment of about 27,000 — to withstand that. One move, of course, would be to continue with major tuition hikes, but he speculates that it would require a doubling of in-state tuition to make up for the lost state money. He also scoffs at trying to make up the money through volume, such as increasing enrollment to 63,000. "That doesn't work for CSU; that doesn't work for this community," he said.

That's where the on-campus stadium comes into play, with the country seeing — and the fans attending the games getting — a better feel for the campus itself than if games continue to play be played at Hughes Stadium, which opened in 1968 along the foothills to the west of campus. Frank said a realistic goal could be to add 2,000 to 3,000 in-state students, while pursuing even harder additional out-of-state students.

"The carrying capacity of this campus is somewhere between 35,000 and 40,000," he said. "You've got plenty of room for nonresident growth that maintains the character of the campus."

While there may be good arguments for the building of a new stadium in Fort Collins, the appeal to the tuition gaps smacks of an argument of convenience. Let's take a look at the numbers. 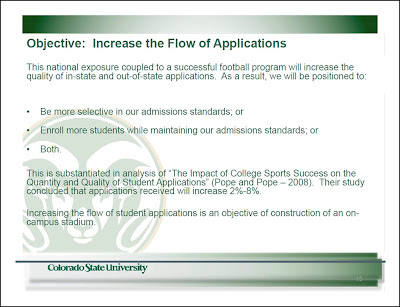 In his presentation of February 3, 2012, CSU athletic director Jack Graham explained that "increasing the flow of student applications is an objective of construction of an on campus stadium" (here in PDF). The relevant slide from Graham's presentation is shown above.


For basketball, the results suggest that being one of the 64 teams in the NCAA tournament yields approximately a 1% increase in applications the following year, making it to the “sweet sixteen” yields a 3% increase, the “final four” a 4-5% increase, and winning the tournament a 7-8% increase. The impact of the athletic lags, are as we expected. While there is an effect of winning on the current year’s applications, the largest effect comes in the first lag. By the third lag, the effect has usually diminished substantially. . .

For football, the results suggest that ending the season ranked in the top twenty in football yields approximately a 2.5% increase in applications the following year, ending in the top ten yields a 3% increase, and winning the football championship a 7-8% increase. The largest effect is on the current football sports variable along with a small effect on the first lag.

The numbers above are for all universities, public and private, and the study finds larger effects for private schools. CSU is public, but let's set that distinction aside, and place the numbers reported above into the context of actual admissions numbers for CSU.

In 2011 CSU received about 16,000 applications of which about 7,000 were out of state. A top-20 team would therefore boost out of state applicants by 175, a top-10 team by 210 applications and a National Championship by as much as 560 applicants. This boost would be for only one year, after which the effect would disappear. I think it is safe to say that CSU's football successes simply cannot drive large increases in out-of-state applications, even with a national championship every year.

There may indeed be good reasons to build a new stadium at CSU, but increasing student applications, improving the academic quality of the study body and filling the State budget tuition hole cannot be supported based on the evidence provided by CSU.
Posted by Roger Pielke, Jr. at 8/20/2012 10:44:00 AM
Email ThisBlogThis!Share to TwitterShare to FacebookShare to Pinterest
Newer Post Older Post Home