Jan Delhey and Christian Kroll of Jacobs University Bremen have a new paper out (here in PDF) with the Social Science Research Center Berlin (Wissenschaftszentrum Berlin für Sozialforschung) in which they ask and answer an interesting question: Do recently proposed metrics to replace GDP actually do better than GDP in predicting peoples reported levels of well being?

Their answer, with one exception, is no.

Here is what they find when they compare income (GNI in PPP) and "six different quality of life" (QOL) metrics proposed to fix/complement/replace GDP with self-reported "subjective well being" averaged for 34 OECD nations:


Do the new QOL measures perform better than the GNI? The surprising answer is no, not across the board (see Table 1). Only one single measure outperforms the GNI, namely the Better Life Index (exclusive of subjective well-being). . . average life contentment is most closely associated with the objective well-being indexes, regardless of which one we consider...

[M]ost new measures fail to deliver what they promise, if we use the average subjective well-being as expressed in representative surveys as the yardstick. Only the OECD’s Better Life Index (to repeat: exclusive of [subjective well being], of course) has an advantage over the GNI in this respect. In contrast, all the other QOL measures employed do not perform better in predicting subjective wellbeing than the GNI, and one measure—the Index of Social Progress—performs worse.

With respect to GDP, the authors find a strong relationship that does not "level off," contrary to conventional wisdom and other findings. They explain: 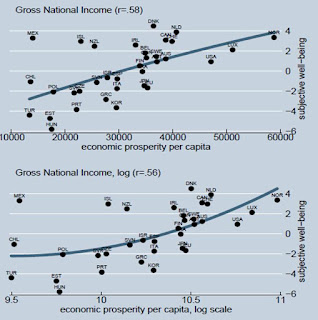 How well does the GDP predict the national SWB? As Figure 3 [immediately above]shows, the correlation between GNI per capita (in purchasing power parities, to adjust for different price levels) and average SWB is very strong (.58) and highly significant. By and large, people enjoy life more in richer countries. There is also no sign of a leveling of this association among the richest nations, as it is often claimed (Inglehart and Klingemann 2000). If one uses a logged scale of GNI per capita, as advocated by many economists, the regression line is even slightly concave, again suggesting that there is no decreasing marginal utility of national income.

What do these findings mean? The authors explain:


One straightforward lesson is that economic activities and the affluence they create actually do make life worthwhile for a huge majority of people—even among the OECD countries, of which many are affluent. This suggests that what Samuelson and Nordhaus observed 60 years ago is still valid today: “People do not live by bread alone. Nor does society live by GNP alone. But on our way to that utopian state of affluence where concern about material well-being will disappear, we do need a summary measure of aggregate economic performance”...

What about the one index that closely outperformed GDP?


The measure that indeed does make a better job than the GNI of predicting national subjective well-being is the Better Life Index. This holds for all the OECD countries, and in particular for the subset of the richest/core countries. Obviously, its life domains and selection of indicators capture the life facets that OECD citizens truly value, over and above the achieved level of economic advancement. More research is needed here to find out exactly what these extra components are that give the Better Life Index added value. Given the fact that previous research has revealed that social capital (especially when compared with the GDP) matters more for the SWB of rich countries than for that of poorer ones (Kroll 2008), our informed guess is that issues of social capital, social cohesion, and greater equality make the difference here.


To summarize our argument, for an economic indicator never intended to assess national well-being, the GDP is surprisingly successful in predicting a population’s subjective well-being. At the same time, the theoretical claim of the social indicators movement about the multi-dimensionality of human concerns is a valid criticism, and conceptually it should be possible to come up with performance measures that embrace this multi-dimensionality better than an economic performance measure alone.

Writing in the FT today, Samuel Brittan explains a risk that accompanies efforts to develop alternative metrics of wellbeing:


Economists have known for a very long time that there are many components of utility not taken into full account in measures of GDP per head. It excludes leisure, the value of work undertaken in the home, environmental harm and benefits. Some have tried to construct more comprehensive human development indices, also covering matters such as literacy, access to clean water and life expectancy. My view has always been that these matters are best considered separately rather than combined in an overall measure that inevitably reflects the personal values of those who draw it up.

The findings of Delhey and Kroll make it difficult to argue with Brittan's conclusion:


[A]t the end of the day, the government can best contribute to happiness by the indirect route of concentrating on its traditional responsibilities for public order, national security, creating the conditions for prosperity and correcting gross disparities in income and wealth.

Calls to replace GDP are common these days. Any such metric should meet the basic empirical test of doing better than GDP in its relationship with outcomes that people care about. Most proposed metrics fail this basic test.

Ultimately, GDP will all but certainly remain core to efforts to measure well being. That said, there are important dimensions that it misses. Bringing those dimensions into view will not, in my view, be accomplished by inventing a better single metric, but by realizing that no one metric captures all that matters and recognizing that understanding well being is complex, multi-dimensional and involves trade-offs that people do not agree about. Multiple metrics will thus aid in both clarity and focus, and help to avoid the risk of experts seeking to impose their values on the broader community via stealth accounting.
Posted by Roger Pielke, Jr. at 8/03/2012 11:05:00 AM
Email ThisBlogThis!Share to TwitterShare to FacebookShare to Pinterest
Newer Post Older Post Home