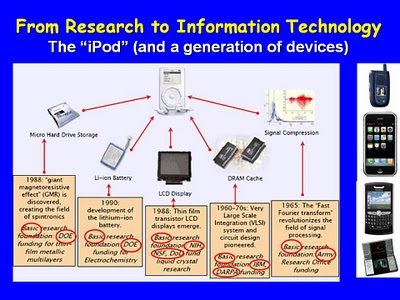 Neal Lane, of Rice University former science advisor to President Bill Clinton, showed the slide above in a recent talk at the University of Colorado (which he provided to me today, Thanks Neal!).  It shows a number of technologies somehow connected to federal innovation investments and their relationship to the iPod, discussed in an earlier post today.

This was even recognized by George W. Bush during his presidency:


Apple has long boasted of its culture of innovation, and how this led to such products as the original Mac and the iPod. However, it turns out that, at least in the case of the iPod, Apple had a hidden ally: the US government. During a speech at Tuskegee University, President (and iPod user) George W. Bush told his audience, "the government funded research in microdrive storage, electrochemistry and signal compression. They did so for one reason: It turned out that those were the key ingredients for the development of the iPod." While we have to gratefully acknowledge the efforts of government agencies such as DARPA in some of the fields mentioned by the President, we also feel obligated to point out the accomplishments of private companies in the US and abroad, including IBM, Hitachi and Toshiba -- not to mention the Fraunhofer Institute, which developed the original MP3 codec, and codeveloped (with Sony, AT&T and others) the AAC format used by Apple in the iPod.

Innovation does not work in linear fashion from basic research ----> application. W. Patrick McCay, who I cited in the previous post on this subject, explains that the story of the iPod and the federal government is far more complex than the linear model suggests:


The full story, of course, was much more complex, revealing the interplay among basic science, instrumentation, federal policy, industrial research, and commercial goals. One cannot help but conclude that the “simple” linear model, when examined closely enough, is anything but.

Our discussions and debates about energy policy need to be better informed by how innovation actually occurs, and not through overly simplistic ideological lens about the role of government in some idealized sense.
Posted by Roger Pielke, Jr. at 11/05/2010 10:32:00 AM
Email ThisBlogThis!Share to TwitterShare to FacebookShare to Pinterest
Newer Post Older Post Home