Emissions Elasticity Test Results are In 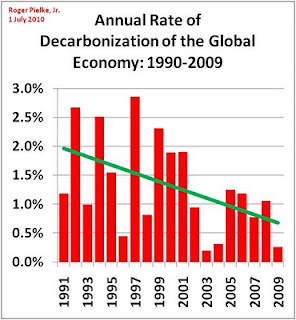 In March, 2009 I noted that the projected decline in carbon dioxide emissions provided a chance for a serendipitous policy experiment:


When we eventually learn what happens to global emissions in response to the economic downturn, we will learn something new about the relationship of GDP growth and emissions. In recent years that relationship has strengthened. What will 2009 tell us?

A paper published in Nature Geoscience today provides the results of that experiment.  The BBC reports:


Carbon emissions fell in 2009 due to the recession - but not by as much as predicted, suggesting the fast upward trend will soon be resumed.
Those are the key findings from an analysis of 2009 emissions data issued in the journal Nature Geoscience a week before the UN climate summit opens.

The report suggests emissions will begin rising by 3% per year again.

"What we find is a drop in emissions from fossil fuels in 2009 of 1.3%, which is not dramatic," said lead researcher Pierre Friedlingstein from the UK's University of Exeter.

"Based on GDP projections last year, we were expecting much more."

Why were they expecting much more?

Because there is a long history of assuming rates of decline in energy intensity and carbon intensity that are simply not matched by what is happening in the real world.  As the AFP explains:


The global decrease was less than half that had been expected, because emerging giant economies were unaffected by the downturn that hit many large industrialised nations.

In addition, they burned more coal, the biggest source of fossil-fuel carbon, while their economies struggled with a higher "carbon intensity," a measure of fuel-efficiency.

The overly optimistic assumptions of energy and carbon intensity decline was at the core of our 2008 paper in Nature, titled Dangerous Assumptions, which can be found here in PDF.

The results of the serendipitous emissions elasticity experiment provides additional, empirical confirmation of the merits of our arguments.  Additional analysis can be found here for the world (graph at the top of this post) and here for the US (graph below), with trends in both instances going the wrong way. 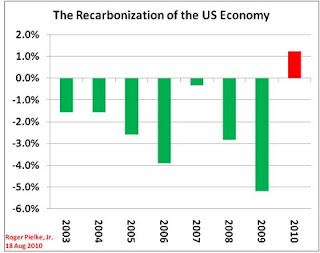