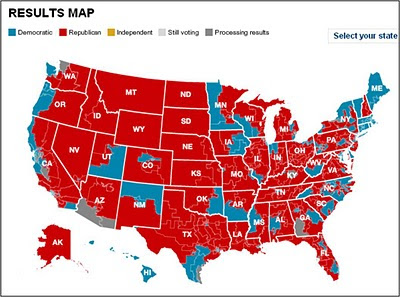 The map above shows the results of the 2010 US mid-term elections for the House of Representatives from CNN, with 13 seats still to be decided.  It is a historic election in many ways, and as significant as the 1994 election.  You see a lot of red in the graph above

Republicans have held more seats in the House in only one Congress (the 80th, 1947-1949) since 1930, with 246 seats (they currently hold 239, with the 13 undecided districts yet to be decided.). Divided government has been the norm much more often than not in recent decades, characterizing 13 of the past 18 Congressional terms (including the forthcoming 112th).

Maybe it is the academic political scientist in me, but irrespective of the political outcomes and the flaws in the process, there is something utterly virtuous in every democratic election.  Of all of the human innovations since fire was tamed, democratic governance has to be at the top of the list. That in itself is something worth celebrating.
Posted by Roger Pielke, Jr. at 11/03/2010 07:31:00 AM
Email ThisBlogThis!Share to TwitterShare to FacebookShare to Pinterest
Newer Post Older Post Home