Much Ado About Very Little 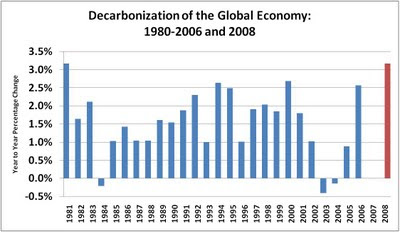 The Financial Times has a front page article today touting the fall in industrial emissions in 2008:

The recession has resulted in an unparalleled fall in greenhouse gas emissions, providing a "unique opportunity" to move the world away from high carbon growth, an International Energy Agency study has found.

In the first big study of the impact of the recession on climate change, the IEA found that CO 2 emissions from burning fossil fuels had undergone "a significant decline" this year - further than in any year in the last 40. The fall will exceed the drop in the 1981 recession that followed the oil crisis.

The graph above shows annual rates of decarbonization of the global economy from 1981 to 2006 (blue bars, using data from Maddison and EIA) and then data for 2008 (red bar) from The World Bank and a German group for carbon dioxide emissions (data for 2007 is not shown). We should have a bit of caution in using two datasets, however, because I am looking at percentage changes rather than absolute values for decarbonization, if the data is accurate then the comparsion should be OK.

The graph shows that the world did indeed accelerate its decarbonization at a rapid rate in 1981, in fact at almost exactly the same amount as in 2008. But then after 1981 the world resumed decarbonization at a much lower rate. The magnitude of emissions decline was larger in 2008 than 1981 for the simple reason that the baseline (and the economy) is much larger.

Some suggest that the reduced emissions in 2008 signify something important:

Fatih Birol, chief IEA economist, said the [2008] fall was "surprising" and would make it "much less difficult" to achieve the emissions reductions scientists say are needed to avoid dangerous global warming. "We have a new situation, with the changes in energy demand and the postponement of many energy investments," he said. "But this only has meaning if we can make use of this unique window of opportunity. [That means] a deal in Copenhagen."

I am afraid that Mr. Birol is kidding himself if he thinks that the 2008 recession will make future emissions reductions efforts "much less difficult." In fact, because the recent recession likely led to the plucking of much "low-hanging fruit" in the global energy economy, it would not be surprising to see rates of decarbonization much lower than 2008 starting in 2009.

Why should we believe that 2008 different is any different than 1981?
Posted by Roger Pielke, Jr. at 9/21/2009 07:03:00 AM
Email ThisBlogThis!Share to TwitterShare to FacebookShare to Pinterest
Newer Post Older Post Home