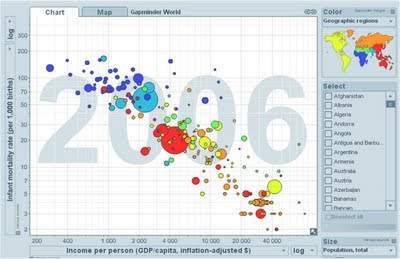 Joseph Stiglitz wants to develop new metrics to assess well being, and cites the limitations of conventional metrics of GDP (pictured above in comparison to infant mortality, from Gapminder.org). He writes in the FT today:

A political leader attempting to promote the well-being of his citizens is pulled in different directions: he will be graded on economic performance but there are many other dimensions to the quality of life, including the state of the environment. While there is no single indicator that can capture something as complex as our society, the metrics commonly used, such as gross domestic product, suggest a trade-off: one can improve the environment only by sacrificing growth. But if we had a comprehensive measure of well-being, perhaps we would see this as a false choice. Such a metric might indicate an increase in wellbeing as the environment improved, even if conventionally measured output went down.

This was one of several motivations for Nicolas Sarkozy, president of France, when he established the International Commission on the Measurement of Economic Performance and Social Progress, which I chaired and for which Amartya Sen served as adviser and Professor Jean-Paul Fitoussi of the Institut d’Etudes Politiques served as co-ordinator, and whose final report is issued on Monday.

National income statistics such as GDP and gross national product were originally intended as a measure of market economic activity, including the public sector. But they have increasingly been thought of as measures of societal well-being, which they are not. Of course, good statisticians have warned against this error. Much economic activity occurs within the home – and this can contribute to individual well-being as much as, or more than, market production.

There are concerns, too, that a focus on the material aspects of GDP may be especially inappropriate as the world faces the crisis of global warming. Should we “punish” a country – in terms of our measure of performance – if it decides to take some of the fruits of the increase in productivity from the advancement of knowledge in the form of leisure, rather than just consuming more and more goods?

What we measure affects what we do. If we have the wrong metrics, we will strive for the wrong things. In the quest to increase GDP, we may end up with a society in which most citizens have become worse off.

The French commission that Prof. Siglitz is participating on can be found here, along with their interim report issued last June.

While I agree with many of the critiques of GDP asa measure of well being, at the same time it does say something about well being (see the data at gapminder.org). I am not optimistic that new metrics will ever replace GDP, however effective policy making no doubt depends upon a more comprehensive view that GDP alone affords.

From this perspective, I think that Stiglitz is misguided when he writes of GDP that "Flawed statistics may also lead us to make incorrect inferences." This is undoubtedly a true statement, however, it is not that GDP is a "flawed statistic" -- it actually measures quite well what it is supposed to measure. The issue has to do with the use of GDP in policy making as an indicator. This is a little like using student standardized test scores as the sole metric of a graduate student applicant's prospects for success in our graduate program. Sure it works in many cases, but students are more than just a single number, and maybe GPA, letters, interviews and statement of application should be considered as well. Can all this be boiled down to a new and improved index? Perhaps, but I doubt it.

Decision making will continue to require consideration of imperfect and incomplete statistical indicators. Efforts to boil down complex issues like well-being to a single indicator are likely to fail for the same reasons that GDP fails as a single indicator. For better or worse, we will have to continue to rely on multiple indicators about contested and uncertain values.
Posted by Roger Pielke, Jr. at 9/14/2009 02:21:00 AM
Email ThisBlogThis!Share to TwitterShare to FacebookShare to Pinterest
Newer Post Older Post Home