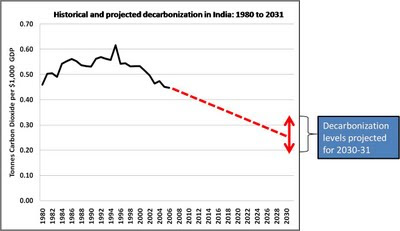 The Indian government has released a report showing what it claims to be its best guesses for future emissions trajectories under "business as usual," or in other words (from p. 16, available here, thanks BK),

which do not involve any new policies relevant to GHG mitigation, to determine the trajectory of GHG emissions in the economy without GHG constraints till 2030/31.

The scenarios suggest that India has already transformed its economy to one that is very aggressively decarbonizing, as illustrated in the above figure, which shows the historical CO2 per $1,000 of GDP (black curve, data from Maddison and EIA as per usual here) and how these values are expected to change in the future as presented in the new report. The red double-sided arrow shows the range of projected carbon intensities of the Indian economy for 2031 from the 5 different projections offered in the report, and the red dashed line connects the 2006 values to the mid-point of that 2031 range.

However, when it comes to staining credulity India is not alone, as it turns out that the "spontaneous decarbonization" trick comes in pretty handy for many participants in the climate policy debate.
Posted by Roger Pielke, Jr. at 9/02/2009 10:04:00 PM
Email ThisBlogThis!Share to TwitterShare to FacebookShare to Pinterest
Newer Post Older Post Home