Recently I've seen a number of claims made about China's plans to improve the energy intensity of its economy. Here are some examples:

From the Christian Science Monitor:

Considering the country already has reduced its economy’s energy intensity by 20 percent over the past five years, the shift to carbon intensity with a meaningful goal attached “would be significant and impressive,” says Reid Detchon, vice president for energy and climate at the United Nations Foundation in Washington.

China appears to be making steady progress toward its goal of achieving a 20-percent reduction in energy intensity by 2010.

"This suite of policies [alluded to today at the UN] will take China to be the world leader on addressing climate change," he said. De Boer told reporters: "It will be quite ironic to hear that tomorrow expressed in a country (the United States) that is firmly convinced that China is doing nothing to address climate change."

But such claims -- and there are many these days -- are made with absolutely no reference to data, so I decided to have a look. Getting data on China's economy and energy use can be tricky, so I have relied on two reliable sources, the BP Statistical Energy Review for energy consumption and the IMF for GDP. I used GDP expressed in constant national currency because the 11th Five-Year Plan of the Chinese government expressed its GDP numbers in terms of market exchange rates and not in terms of PPP. The plan seeks to reduce energy intensity of GDP by 20% from a 2005 baseline.
Energy intensity is thus energy consumption divded by GDP. The graph below shows Chinese energy intensity for the period 1998 to 2008, with 2005 (the Plan's base year) set to 1.0. 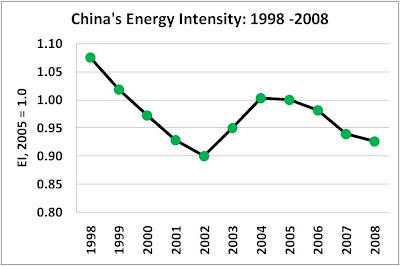 A few things stand out. One is that China's energy intensity in 2008 is about the same as it was in 2001. Any claim that China's energy intensity has improved by 20% over the past five years is incorrect. The second is that energy intensity has improved by only about 7.4% since 2005, meaning that it has a long way to go to reach a 20% target by 2010 (i.e., 0.80 on this graph). Can it happen? Sure. But to say that China is "well on its way" does not square with the data. It would be "ironic" indeed if China has figured out how to grow its economy at 9% per year while increasing energy use by only 3% and decarbonizing its economy at an even lower amount. If this were true, then China would have discovered the holy grail of emissions reductions and we can all forget about the challenges of climate policy.

With all of the talk of China now being the "world leader" on emissions reductions, is this story just another myth of climate policy? It sure looks that way.
Posted by Roger Pielke, Jr. at 9/22/2009 07:23:00 PM
Email ThisBlogThis!Share to TwitterShare to FacebookShare to Pinterest
Newer Post Older Post Home