What is Basic Research?


Elder and Cobb (1983) define a symbol as: ‘‘any object used by human beings to index meanings that are not inherent in, nor discernible from, the object itself.’’ They continue:


Literally anything can be a symbol: a word or a phrase, a gesture or an event, a person, a place, or a thing. An object becomes a symbol when people endow it with meaning value or significance.

In his classic essay, Sapir (1934) distinguishes two types of symbols, referential and condensational. Referential symbols are ‘‘economical devices for purposes of reference.’’ So each of the following is an example of a referential symbol - @, ?, &, Z, WORD, ;-). A second type of symbol distinguished by Sapir is one that carries with it ‘‘emotional tension in conscious or unconscious form.’’ Examples of such symbols would include 9/11, a swastika, the American flag, and your name. Sapir asserts that ‘‘society is peculiarly subject to the influence of symbols in such emotionally charged fields as religion and politics.’’

Basic research serves as a symbol of identification, demand and expectation (see the paper for discussion, but I am sure that you can think of many examples). Its plasticity means that it fulfills multiple roles simultaneously, as shown in the following table (from this essay in PDF). 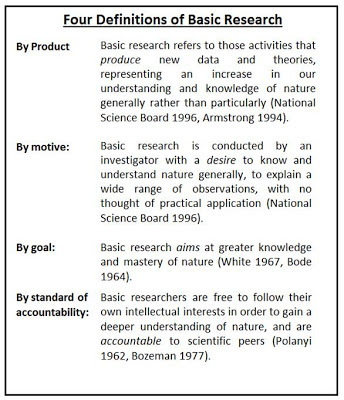 So basic research is no one thing, and as such it can be fruitlessto argue over its exact meaning. Similarly,other political symbols -- 9/11, the American flag, a swastika -- carry with them many meanings, some contradictory and irreconcilable.

In the politics of science "basic research" -- and its variants in use today such as fundamental research and transformative research -- allow scientists to claim to be following their curiosity wherever it may lead, while policy makers can claim something quite different, namely that funding such work is "basic" or "fundamental" to economic growth and other societal benefits. The agreement to carry contradictory definitions at once is a key factor in the stability of post-World War II science policy (and how we got the linear model). However, as budgets get tighter and the public demands accountability and results that stability has shown signs of strain.

The popularization of "basic research" via Vannevar Bush's seminal 1945 report Science--The Endless Frontier was no accident. Again quoting from my paper:


To persuade the Congress of the pragmatically inclined United States to establish a strong organization to support fundamental research would seem to be one of the minor miracles… When talking matters over with some of these [people on Capitol Hill], it was well to avoid the word fundamental and to use basic instead.

Bush’s semiotic innovation is well grounded in political theory. Lasswell (1969) observes ‘‘ambiguity is an aid to concerted action.’’ He continues, ‘‘A high degree of generality is essential to popular appeal; symbols must be sufficiently vague to enable the individual to transfer his private loves and hates and hopes and fears to the slogans and catchwords of the movement.’’

So what is "basic research"?

It is motherhood, apple pie and all that is good. It is, as Brian Cox would say, axiomatically a good thing. As such, "basic research" as a political symbol has proven to be a big obstacle to science policy research. After all, why question something that is axiomatically good? What are you, anti-science? Further, the inherent virtue of basic research means that precise knowledge of mechanisms of that goodness are not needed.

If decisions about science and utilizing science are to be systematically evaluated and refined, it will be necessary to move beyond political symbols. But political symbols, obviously, are powerful things.
Posted by Roger Pielke, Jr. at 2/20/2013 01:50:00 PM
Email ThisBlogThis!Share to TwitterShare to FacebookShare to Pinterest
Newer Post Older Post Home